Calgary, Alberta / ACCESSWIRE / Nov 30, 2014 / Palliser Oil & Gas Corporation (“Palliser” or the “Company“) (TSX VENTURE:PXL) wishes to report financial and operating results for the three and nine months ended September 30, 2014. Certain selected financial and operational information is set out below and should be read in conjunction with Palliser’s financial statements complete with the notes to the financial statements and related MD&A which is expected to be available at www.sedar.com and the Company’s website at www.palliserogc.com on Monday, December 1, 2014. 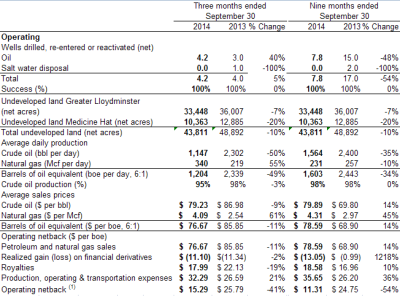 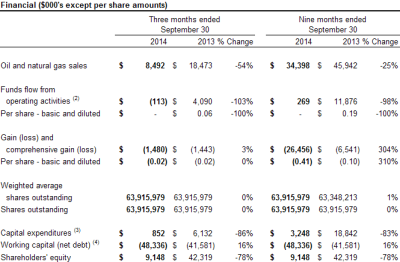 (1) Operating netback is a non-IFRS measure and is the net of petroleum and natural gas sales, realized gain or loss on financial derivatives, royalties and production, operating and transportation expenses.

Management believes these are useful supplemental measures of, firstly, the total net position of current assets and current liabilities of the Company and secondly, the profitability relative to commodity prices. Other entities may calculate these figures differently than Palliser.

Operationally, the third quarter of 2014 was the most active period for Palliser this year, with capital expenditures increased due to the successful farmout programs at Neilburg and Manitou, Saskatchewan and Marwayne, Alberta. Production averaged 1,204 boe/d, a 49 per cent decline from the second quarter 2014 production average of 1,739 boe/d, due to natural declines and the sale of approximately 125 bbl/d at Manitou, Saskatchewan to Maha Energy Inc. (“Maha”) for $2.15 million (approximately $1.9 million after interim adjustments) (the “Manitou Sale”), which closed on July 30, 2014.

Palliser recorded negative funds flow from operating activities of ($113,000) in the quarter. The third quarter saw weaker heavy oil pricing, with Palliser realizing an average crude oil price of $76.67/bbl for its heavy oil sales. The Company incurred hedging losses in the amount of $1.2 million that negatively impacted funds flow from operating activities, however, with the recent drop in world oil prices, the hedging program is forecasted to increase Q4 funds flow by $1.0 million. Additionally, transaction costs associated with the Maha amalgamation agreement, totaling approximately $0.3 million, negatively impacted funds flow in the quarter. As compared to the third quarter in 2013, production, operating, and transportation expenses increased 21% due to lower production, whereas expenses in this category are expected to decrease in Q4 as a result of optimizing efficiencies being implemented in the field. General and administrative (“G&A”) expenses were 10% lower than the prior year comparative period, mainly due to decreases in employee numbers and wages and consulting fees, with further reductions expected in Q4 for similar reasons.

Capital expenditures totaled $0.9 million in Q3, an 86% reduction when related to the comparative period in 2013. Capital expenditures included capital workovers, capitalized G&A expenses, and seven (4.2 net) well activities, including three (1.65 net) heavy oil new drills and four (2.8 net) well reactivations that were brought on production in the third quarter. Production from the new wells is forecasted to ramp up through the fourth quarter. The successful third quarter capital program is forecasted to generate increased production into the fourth quarter.

Palliser signed two farmout agreements with Maha for a capital program that was undertaken at no cost to Palliser, with the exception that surface equipment for all of the wells was supplied from Palliser’s inventory of surplus equipment. At Manitou, one (0.3 net before payout & 0.5 net after payout) well has been drilled and cased and was completed for heavy oil production in early September. At Marwayne, Alberta, four (2.8 net) wells were reactivated in August and September and all wells are now on production.

In a farmout with a third party at Neilburg, Saskatchewan, two (1.15 net) wells were drilled by the end of September, with the wells placed on production late in the third quarter. Palliser is the operator of the wells subject to the Manitou Sale and all of the wells drilled and re-activated in the Maha and third party farmout programs.

At September 30, 2014 the Company had a working capital deficiency (net debt) totaling $48.3 million (excluding financial derivatives). The Company is not in compliance with a covenant under its bank loan. The Company is required to maintain a current ratio (current assets divided by current liabilities) of not less than 1.0:1.0. As at September 30, 2014 and the date of this report the Company was not in compliance with the current ratio banking covenant. The Company does not anticipate generating sufficient funds flow from operating activities in the upcoming year to fund its working capital deficiency.

The proposed amalgamation of the Company and Maha pursuant to an amalgamation agreement between the Company and Maha dated July 30, 2014 has expired by its terms. The Company, its lender and Maha are actively engaged in the negotiation of a potential new amalgamation agreement and a potential amended credit facility which, if concluded, will be put to Palliser’s shareholders for approval. On July 29, 2014, Palliser and the National Bank of Canada entered into a Loan Amending and Extension Forbearance Agreement, wherein the lender extended the Company’s credit facilities to October 31, 2014. In order to permit Maha, Palliser and Palliser’s lender to continue negotiations relative to the terms of a potential transaction, the terms of the forbearance agreement between Palliser and its lender have been extended to December 5, 2014.

The Company also announces that Stephen Hayden, Director, has resigned effective November 21, 2014. Palliser wishes Mr. Hayden success in his future endeavours and thanks him for his contribution to the Company.

Palliser is a Calgary-based junior oil and gas company focused on high netback heavy oil production in the greater Lloydminster area of Alberta and Saskatchewan.

Investors are cautioned that, except as disclosed in the management Joint Information Circular to be prepared in connection with the transaction, any information released or received with respect to the Reverse Takeover may not be accurate or complete and should not be relied upon. Trading in the securities of Palliser should be considered highly speculative.

The TSXV has in no way passed upon the merits of the proposed Amalgamation transaction and has neither approved nor disapproved the contents of this press release.

Statements in this document may contain forward-looking information including matters related to the strategic review. The reader is cautioned that assumptions used in the preparation of such information may prove to be incorrect. Events or circumstances may cause actual results to differ materially from those predicted, as a result of numerous known and unknown risks, uncertainties, and other factors, many of which are beyond the control of the Company. These risks include, but are not limited to: the risks associated with the oil and gas industry; commodity prices, and; exchange rate changes. Industry related risks could include, but are not limited to: operational risks in exploration; proposed dispositions not being completed or if completed, not providing the benefits expected; development and production; delays or changes in plans; risks associated to the uncertainty of reserve estimates; health and safety risks, and; the uncertainty of estimates and projections of production, costs and expenses. In addition, forward-looking statements or information are based on a number of factors and assumptions which have been used to develop such statements and information but which may prove to be incorrect. Although the Company believes that the expectations reflected in such forward-looking statements or information are reasonable, undue reliance should not be placed on forward-looking statements because the Company can give no assurance that such expectations will prove to be correct. In addition to other factors and assumptions which may be identified herein, assumptions have been made regarding, among other things: the ability of the Company to obtain financing on acceptable terms; the impact of increasing competition; the general stability of the economic and political environment in which the Company operates; the timely receipt of any required regulatory approvals; the ability of the Company to obtain qualified staff, equipment and services in a timely and cost efficient manner; drilling results; the ability of the operator of the projects which the Company has an interest in to operate the field in a safe, efficient and effective manner; field production rates and decline rates; the ability to replace and expand reserves through acquisition, development and exploration; the timing and costs of pipeline, storage and facility construction and expansion and the ability of the Company to secure adequate product transportation; future commodity prices; currency, exchange and interest rates; the regulatory framework regarding royalties, taxes and environmental matters in the jurisdictions in which the Company operates; and the ability of the Company to successfully market its oil and natural gas products. Readers are cautioned that the foregoing lists of factors and assumptions are not exhaustive. Additional information on these and other factors that could affect the Company’s operations and financial results are included in reports on file with Canadian securities regulatory authorities and may be accessed through the SEDAR website (www.sedar.com), at the Company’s website (www.palliserogc.com). Furthermore, the forward-looking statements contained in this news release are made as at the date of this news release and the Company does not undertake any obligation to update publicly or to revise any of the included forward-looking statements, whether as a result of new information, future events or otherwise, except as may be required by applicable securities laws.

The Company has adopted the industry standard of 6:1 Mcf to Bbl when converting natural gas to barrels of oil equivalent. Disclosure provided herein in respect of Boes may be misleading, particularly if used in isolation. A Boe conversion ratio of 6 Mcf:1 Bbl is based on an energy equivalency conversion method primarily applicable at the burner tip and does not represent a value equivalency at the wellhead. Given that the value ratio based on the current price of crude oil as compared to natural gas is significantly different from the energy equivalency of 6 Mcf:1 Bbl, utilizing a conversion ratio of 6:1 may be misleading as an indication of value.