TORONTO, March 10, 2017 /CNW/ – The Canadian economy is showing strength in employment, housing starts and a rebound in energy investment according to the latest RBC Economic Outlook report. RBC Economics expects real gross domestic product (GDP) to grow by 2.0 per cent in 2017, followed by a slightly firmer 2.1 per cent in 2018. 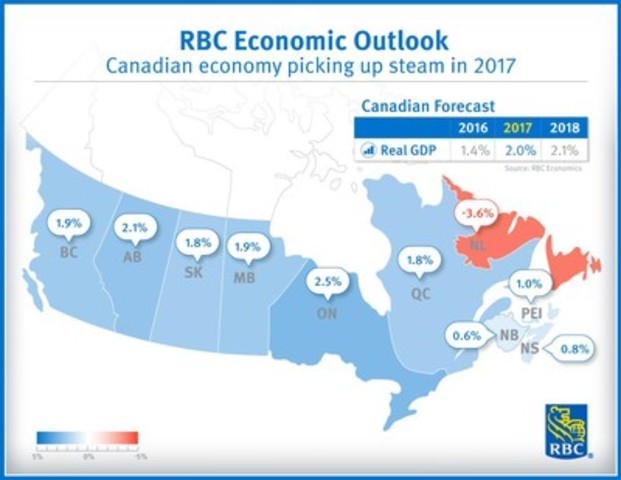 Consumers will continue to support growth in 2017, according to the latest RBC Economic Outlook report. Canadian exports are projected to accelerate slightly following a subpar performance in 2016.

“Economic conditions, including a pickup in U.S. business investment and modest U.S. export growth, are likely to bolster Canadian exports, but the threat of protectionist trade policies has the potential to hurt Canada's small, open economy,” said Craig Wright, senior vice-president and chief economist at RBC.

Federal government spending on infrastructure projects will provide more significant support in 2017 and this activity is expected to add almost half a percentage point to the national growth rate. At the same time, a slowdown in real estate activity is likely to weigh down growth, as lack of affordability and legislative changes cool some overheated urban housing markets.

Interest rates to pressure Canadian dollar
While a steady, modest increase in energy prices is positive for the Canadian dollar, a more significant factor in 2017 will be the interest rate differential between Canada and the United States. The U.S. dollar is likely to appreciate against most major currencies as the Federal Reserve raises rates through the year. Stronger-than-expected U.S. economic data will likely prompt the Fed to increase its policy rate by 25 basis points this month, and a further 50 basis points later in 2017. The Bank of Canada is expected to start tightening in 2018, which will stabilize the interest rate differential next year.

Ontario to lead provinces in 2017 growth
The outlook for the provincial economies is generally bright. Modest growth is seen in the Maritime provinces with more vigorous expansion to come in the central and western provinces. Ontario is expected to lead the way for the first time since 2000, with a growth rate of 2.5 per cent.

Two of Canada's oil-producing provinces, Alberta and Saskatchewan, will swing back to positive growth in 2017 after two years of economic contraction. However, despite a recovery in energy markets, RBC expects economic activity in Newfoundland and Labrador to decline the most (-3.6 per cent) since 2012.

Can growth momentum trump uncertainty?
RBC forecasts global growth will hit 3.4 per cent in 2017, the best pace since 2014, although geopolitical uncertainties stemming from the U.S. administration's economic policies, the U.K.'s Brexit negotiations with the European Union, and elections in France and the Netherlands have potential to negatively affect global trade flows and associated growth.

Global inflation is poised to rise alongside the rebound in energy prices. Nevertheless, RBC expects central banks in Europe, England and Canada to leave monetary policy unchanged as these economies continue to operate with excess capacity.

Tax, trade questions hang over U.S. outlook
The U.S. economy is projected to grow by 2.3 per cent in 2017 and the same pace in 2018. While RBC assumes the U.S. administration will lower taxes, which would boost consumer and business spending, the timing and configuration of tax policy changes are not clear.

If the administration's anti-trade rhetoric results in actual levies on U.S. imports, then U.S. consumers would face higher costs and countries affected by the tariffs would be expected to retaliate, negatively affecting U.S. GDP and employment.

A summary of each province's economic outlook can be found in this fact sheet.

About RBC
Royal Bank of Canada is Canada's largest bank, and one of the largest banks in the world, based on market capitalization. We are one of North America's leading diversified financial services companies, and provide personal and commercial banking, wealth management, insurance, investor services and capital markets products and services on a global basis. We have over 80,000 full- and part-time employees who serve more than 16 million personal, business, public sector and institutional clients through offices in Canada, the U.S. and 35 other countries. For more information, please visit http://www.rbc.com/.‎

To view the original version on PR Newswire, visit: http://www.newswire.ca/en/releases/archive/March2017/10/c4531.html