OTTAWA, April 28, 2017 /CNW/ – The Canadian Transportation Agency (Agency) announced a 4.1 percent increase in the Volume-Related Composite Price Index (VRCPI), which is used in determining the Maximum Revenue Entitlement (MRE) for the Canadian National Railway Company (CN) and the Canadian Pacific Railway Company (CP) for the movement of western grain. Determination No. R-2017-37 sets the VRCPI at 1.3817 for the 2017‑2018 crop year, which will begin on August 1. 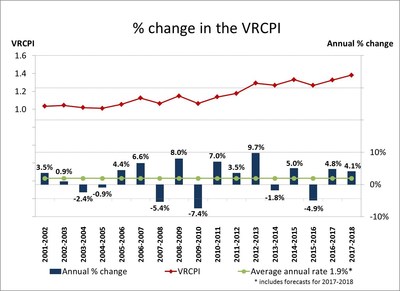 Essentially an inflation factor, the VRCPI reflects a composite of the forecasted prices for railway labour, fuel, material and capital purchases. The VRCPI is one of the factors included in the formula used to calculate CN's and CP's grain revenue entitlements. In determining the VRCPI, the Agency examines and verifies detailed railway submissions and collects and analyzes various data to develop the forecasts. The VRCPI of 1.3817 will be applied when the Agency makes its grain revenue entitlement determinations by December 31, 2018 for the 2017‑2018 crop year.

The 4.1 percent increase in the VRCPI stems from two main sources:

The volatility present in each of the two main components used in the Agency's fuel forecasting models – i.e., the price of crude oil and the Canada/U.S. exchange rate – render these items, and therefore, the price of fuel, difficult to predict.

The VRCPI has tracked up and down since the beginning of the MRE regime. In recent years, exceptional fluctuations have reflected the volatility of fuel prices, the one-time hopper car adjustment in 2007-2008 and, as outlined in Decision No. 149-R-2012, the application of methodologies to better recognize the cost of capital and the effect on the labour price index of the substantial payments made by CN and CP to their pension funds.

The Canadian Transportation Agency is an independent, quasi-judicial tribunal and regulator with the powers of a superior court. The Agency has three core mandates: keeping the national transportation system running efficiently and smoothly, protecting the human right of persons with disabilities to an accessible transportation network and providing consumer protection for air passengers. To help advance these mandates, the Agency applies ground rules that establish the rights and responsibilities of transportation service providers and users and level the playing field among competitors. It also resolves disputes using a range of tools from facilitation and mediation to arbitration and adjudication. In addition, it ensures that transportation providers and users are aware of their rights and responsibilities and how the Agency can help them.