TORONTO, May 26, 2017 /CNW/ – The Scotiabank Commodity Price Index gaining 2.0% m/m in April as strong energy and forest products performance more than compensated for a minor sell-off in metals markets. Oil prices fell to their lowest levels in early May since the initial announcement of the OPEC/non-OPEC supply agreement before recovering on news of Saudi and Russian support for a 9-month extension of the deal. Despite this, the oil market recovery is still fragile and requires further production discipline from OPEC members and other large producers. 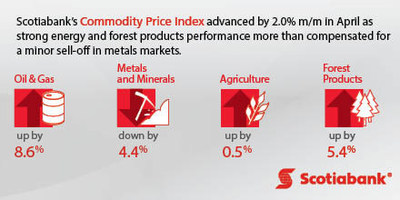 “Our base case outlook for oil sees the market entering a supply deficit that will begin to draw down the inventory glut in OECD countries, and this is expected to accelerate in the latter half of 2017,” said Rory Johnston, Commodity Economist at Scotiabank. “We expect that OECD industry inventory will return to more typical levels by mid-2018.”

The non-OPEC supply outlook is split between the expected surge in U.S. supply and the generally anemic production outside the Unites States. The OPEC deal successfully helped raise prices into the $50-55/bbl range and allowed U.S. shale producers to hedge most of their production through 2017 and into 2018 at a profitable return. Price certainty, coupled with ever-rising rig counts and efficiency gains, has prompted the adoption of an aggressive U.S. production forecast.

The softwood lumber market is now managing through the fifth modern iteration of the Canada-U.S. softwood lumber dispute. In late-April, five Canadian softwood producers were assigned specific tariff rates ranging from 3.02% to 24.12%, with the remainder of the Canadian industry subject to a 19.88% tariff.

Demand for softwood lumber, used primarily in the construction and refurbishment of houses, is relatively inelastic. Lumber accounts for a small component of aggregate home-building costs and neither homebuilders nor buyers are likely to materially change their behaviour due to an increase in softwood prices. The effect of these duties on Canadian softwood lumber exports is a price increase that is absorbed by U.S. consumers as Canadian lumber is shifted higher on the regional cost curve. U.S. softwood lumber consumption far outstrips its domestic capacity and demand is expected to continue rising on the back of housing sector strength.

Scotiabank provides clients with in-depth research into the factors shaping the outlook for Canada and the global economy, including macroeconomic developments, currency and capital market trends, commodity and industry performance, as well as monetary, fiscal and public policy issues.

Scotiabank is Canada's international bank and a leading financial services provider in North America, Latin America, the Caribbean and Central America, and Asia-Pacific. We are dedicated to helping our 23 million customers become better off through a broad range of advice, products and services, including personal and commercial banking, wealth management and private banking, corporate and investment banking, and capital markets. With a team of more than 88,000 employees and assets of $887 billion (as at January 31, 2017), Scotiabank trades on the Toronto (TSX: BNS) and New York Exchanges (NYSE: BNS). For more information, please visit www.scotiabank.com and follow us on Twitter @ScotiabankViews.