CALGARY, May 15, 2018 /CNW/ – Surge Energy Inc. (“Surge” or the “Company”) (TSX: SGY) is pleased to announce the execution of a formal purchase and sale agreement for the acquisition (the “Acquisition”) of high netback, waterflooded, crude oil producing assets (the “Assets”) in the Company’s core Sparky area of Central Alberta for a purchase price of $28.4 million, which is expected to close on or about May 31, 2018.

Current production from the Assets is more than 620 boepd (83 percent oil), with over 75 percent of the production focused in Surge’s large original oil in place (“OOIP”1), high netback, core Sparky crude oil properties at Eyehill and Macklin. The Assets have an annual decline of less than 27 percent, and a netback of more than $30 per boe at US $65 WTI2 per barrel oil prices. The Acquisition is accretive to Surge on all key debt adjusted per share metrics. Surge has identified more than 35 net low-risk Sparky development drilling locations on the Assets. The Assets have a large internally estimated OOIP of over 85 million barrels, and an average gravity of 27o API.

In conjunction with the Acquisition, Surge is also revising upward the Company’s 2018 exit production guidance from 16,650 boepd to 17,175 boepd (82 percent oil).

In addition, as a result of better than anticipated Q1 2018 drilling and waterflood results (as Press Released on May 8, 2018), the Sparky core area Acquisition, significantly higher strip crude oil prices than estimated, and the narrowing of WCS differentials to near historical levels, Surge is generating substantial free adjusted funds flow, (resulting in an estimated dividend simple payout ratio of less than 15 percent) at current strip crude oil prices. Accordingly, Surge’s Board of Directors has approved an increase to the Company’s annual dividend from $0.095 per share per year ($0.0079 per share per month) to $0.10 per share per year ($0.0083 per share per month).

The Assets are located in the Company’s Sparky core area trend in which Surge currently has over 700 million barrels of internally estimated net OOIP. The Eyehill and Macklin properties included in the Acquisition represent over 75 percent of the current production from the Assets, and directly offset Surge’s current production and drilling operations. Surge has identified over 35 net low-risk drilling locations, with additional waterflood upside on these two key properties. The Assets are characterized by the following attributes:

The $28.4 million Acquisition has the following transaction metrics:

This Acquisition is accretive on all key debt adjusted per share metrics.

Production in Surge’s Sparky core area has increased 145 percent over the last 2 years, from 2,850 boepd to over 7,000 boepd (85 percent oil) today. Each of Surge’s core assets depicted below can be characterized as a high quality, low risk, operated, large OOIP, conventional sandstone reservoirs. 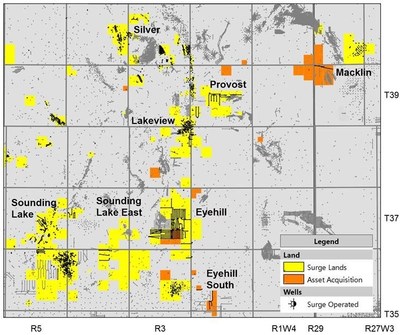 Over the last 2 years, Surge has successfully grown production in the Company’s Sparky core area by more than 145 percent – turning its key producing Sparky asset base into a low cost, high netback, conventional sandstone resource play.

Over the past 12 months Surge has successfully completed three separate accretive Sparky core area acquisitions, purchasing over 2,200 boepd (90 percent oil) combined, for an average of less than five times forward adjusted funds flow from the acquired assets. The combination of these transactions, together with Surge’s highly successful development drilling program, have allowed the Company to amass an exciting core growth area with the following characteristics:

Overall, the Company anticipates its Sparky core area to grow from 7,000 boepd currently, to over 10,000 boepd over the next three to four years.

Based on better than anticipated drilling and waterflood results, (as Press Released on May 8, 2018), Surge’s Q1 2018 production of 16,027 boepd again exceeded managements budgeted expectations.

Surge’s upwardly revised guidance for 2018 is set forth below:

Based on better drilling results than anticipated at the Company’s core Valhalla light oil property, Surge has added one net Valhalla well in the fall of 2018 to its capital expenditure budget, plus $1 million of incremental facilities capital to handle the associated light oil volumes.

As a result of the Sparky core area Acquisition, along with better than anticipated operational results in Q1 2018, significantly higher strip WTI oil prices than the Company was budgeting, as well as WCS crude oil differentials narrowing close to long term average levels, Surge has much larger free adjusted funds flow in 2018 than management was projecting.

Accordingly, with the ongoing protection from Surge’s strategic commodity hedging program, the Board and management of Surge intend to increase the Company’s dividend by 5.3 percent, from $21.9 million annually to approximately $23.1 million annually, effective June 15th, 2018.

This equates to a simple payout ratio of less than 16 percent of forecast 2H 2018 annualized adjusted funds flow at WTI crude oil prices of US $65 WTI per barrel, including a WCS differential assumption of US$18 per barrel.

Management’s stated goal is to be the best positioned light/medium gravity crude oil growth and dividend paying public company in our peer group in Canada.

Surge will continue to grow its production base and location inventory in the Company’s three core areas – at Sparky, Shaunavon, and Valhalla – through, organic, low risk, development drilling, combined with strategic, high quality, core area acquisitions.

More particularly, this press release contains statements concerning: the closing of and anticipated benefits of the Acquisition; the impact of the Acquisition on the Company and its results and development plans; the expected characteristics of the Assets;; management’s plans for development in certain core areas and the expected upside of such development; the fit of the Assets with the Company’s existing assets; the expected closing date of the Acquisition;; production volumes; expected drilling activities and locations; Surge’s capital expenditure program, including drilling and development plans and enhanced recovery projects and the timing and results to be expected thereof; expectations with respect to the Company’s ability to operate and succeed in the current commodity price environment; the Company’s declared focus and primary goals; the Corporation’s Five Year Business Plan; management’s forecast of adjusted funds flow ratio; guidance with respect to 2018 average and exit production and production per share; free adjusted funds flow; management’s intention to increase Surge’s dividend and the timing thereof the sustainability of the dividend; simple payout ratio; sustainability; recycle ratios; recovery factors; estimated reserves multiples; operating netbacks; management’s estimates and expectations regarding capital expenditures, operating costs, transportation expenses, growth opportunities and strategies, estimated reserves and estimated reserve life index and decline rates; the Company’s revised 2018 exit guidance; the availability of Surge’s bank line to provide the Company with sufficient liquidity and financial flexibility; expected shareholder return; the potential appreciation of the Company’s shares; the impact of cost savings initiatives; production and cash flow per share growth; and anticipated commodity prices; drilling inventories and locations; and management’s expectations regarding debt levels.

The forward-looking statements are based on certain key expectations and assumptions made by Surge, including expectations and assumptions concerning the performance of existing wells and success obtained in closing the Acquisition, drilling new wells, anticipated expenses, cash flow and capital expenditures, the application of regulatory and royalty regimes, prevailing commodity prices and economic conditions, development and completion activities, the performance of new wells, the successful implementation of waterflood programs, the availability of and performance of facilities and pipelines, the geological characteristics of Surge’s properties and the Assets, the successful application of drilling, completion and seismic technology, the determination of decommissioning liabilities, prevailing weather conditions, exchange rates, licensing requirements, the impact of completed facilities on operating costs and the availability, costs of capital, labour and services and the creditworthiness of industry partners and the impact of transactions on Surge’s bank line.

Although Surge believes that the expectations and assumptions on which the forward-looking statements are based are reasonable, undue reliance should not be placed on the forward-looking statements because Surge can give no assurance that they will prove to be correct. Since forward-looking statements address future events and conditions, by their very nature they involve inherent risks and uncertainties. Actual results could differ materially from those currently anticipated due to a number of factors and risks. These include, but are not limited to, risks associated with the oil and gas industry in general (e.g., operational risks in development, exploration and production; delays or changes in plans with respect to exploration or development projects, capital expenditures or the closing of the Acquisition; the uncertainty of reserve estimates; the uncertainty of estimates and projections relating to production, costs and expenses, and health, safety and environmental risks), commodity price and exchange rate fluctuations and constraint in the availability of services, adverse weather or break-up conditions, uncertainties resulting from potential delays or changes in plans with respect to exploration or development projects or capital expenditures or failure to obtain the continued support of the lenders under Surge’s bank line. Certain of these risks are set out in more detail in Surge’s Annual Information Form dated March 14, 2018 and in Surge’s MD&A for the period ended March 31, 2018, both of which have been filed on SEDAR and can be accessed at www.sedar.com.

“Boe” means barrel of oil equivalent on the basis of 1 boe to 6,000 cubic feet of natural gas. Boe may be misleading, particularly if used in isolation. A boe conversion ratio of 1 boe for 6,000 cubic feet of natural gas is based on an energy equivalency conversion method primarily applicable at the burner tip and does not represent a value equivalency at the wellhead. “Boe/d” and “boepd” mean barrel of oil equivalent per day. Original Oil in Place (“OOIP”) is the equivalent to Discovered Petroleum Initially In Place (“DPIIP”) for the purposes of this press release.  DPIIP is defined as quantity of hydrocarbons that are estimated to be in place within a known accumulation. There is no certainty that it will be commercially viable to produce any portion of the resources. A recovery project cannot be defined for this volume of DPIIP at this time, and as such it cannot be further sub-categorized. “Internally estimated” means an estimate that is derived by Surge’s internal APEGA certified Engineers, and Geologists and prepared in accordance with National Instrument 51-101 – Standards of Disclosure for Oil and Gas Activities. All internal estimates contained in this new release have been prepared effective as of May 1, 2018 The “recycle ratio”, equals the profit per barrel divided by the total cost of discovering and extracting that barrel. “Total proved plus probable reserves multiple” is the purchase price of the Assets ($28.4 million) divided by the internally estimated total proved plus probable reserves (2.9 mmboe). “Corporate production efficiency” is equal to the total capital spent divided by the associated production added. “Internal rate of return” means the discount rate at which the net present value equals zero. “RLI” means reserve life index and equals the estimated remaining reserve divided by the current production.