CALGARY, July 31, 2018 /CNW/ – Bonavista Energy Corporation (“Bonavista”) is pleased to report to shareholders its financial and operating results for the three and six months ended June 30, 2018. In the second quarter of 2018 we generated adjusted funds flow of $65.7 million, allocating $29.0 million to a reduction in total net debt. The unaudited financial statements and notes, as well as management’s discussion and analysis, are available on the System for Electronic Document Analysis and Retrieval (“SEDAR”) at http://www.sedar.com and on Bonavista’s website at www.bonavistaenergy.com. 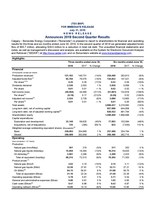 Enhancing excess adjusted funds flow while maintaining production has been our focus in 2018. In the first six months of this year, we have produced on average 70,304 boe per day while spending only 57% of adjusted funds flow on our exploration and development (E&D) program. This has resulted in $51.5 million of surplus funds, net of dividends, available to allocate to total net debt reduction, realizing 65% of our annual target year-to-date. We remain on track to produce between 69,000 and 71,000 boe per day in 2018 and meaningfully reduce total debt throughout the year.

Significant maintenance on NOVA Gas Transmission Ltd. (NGTL), and an active facility turnaround season led to a modest development program in the second quarter, drilling only six wells and completing one well. Notwithstanding the curtailment of approximately 2,400 boe per day due to these interruptions, production averaged 68,214 boe per day in the quarter.

A second quarter highlight of our E&D program was a significant infrastructure project at Strachan. Completed in June, this project enables the start-up of our five-well liquids-rich development program in the second half of 2018 through a low-cost processing facility. We will remain focused on leveraging our low-cost structure and liquids-rich drilling inventory to enhance adjusted funds flow for the remainder of the year.

Operational and financial accomplishments for the second quarter of 2018 include:

Our Deep Basin core area is characterized by stacked, resource-rich natural gas reservoirs with low cost and high margin operations. Our production base and development plans are supported by having ownership in approximately 260 mmcf per day of operated process capacity, and adequate firm receipt service on NOVA Gas Transmission Ltd. (“NGTL”) to accommodate all of our budgeted natural gas production for 2018.

During the first half of 2018, we produced approximately 29,416 boe per day in this core area, representing nine percent growth relative to the prior year period despite approximately 900 boe per day being curtailed due to NGTL maintenance in the second quarter. We spent $30.3 million on E&D activities in the first half with all drilling and completing activity having taken place in the first quarter. For the remainder of the year, we will spend approximately $20 million to drill five (4.5 net) wells, with three of the five wells targeting liquids rich natural gas and oil opportunities.

The Deep Basin wells brought on-stream in the first half of 2018 were focused on high rate natural gas development in the Spirit River and Bluesky zones with seven of the nine wells connected to our low-cost Ansell facility. The two Ansell Wilrich extended reach wells continue to demonstrate strong production rates. After 120 days on production these two wells have averaged 6.1 mmcf per day a 26% improvement over our program in the second half of 2017. The remainder of the activity occurred in the Edson area where five wells are connected to our Ansell facility through a recently commissioned compressor station operating at full capacity since March, with one well left to bring on-stream. The remaining two wells have been restricted to 120 day gas rates between five and six mmcf per day through a nearby non-operated processing facility.

Our West Central core area has a predictable production base with approximately 745,000 net acres and a drilling inventory of approximately 720 horizontal locations within our key plays. This area draws its strength from a low-cost structure, extensive infrastructure and consistent well results.

During the first half of 2018, we spent $43.4 million on E&D activities to drill nine (8.8 net) liquid rich natural gas wells in the Falher, Notikewin and Glauconite formations. At Morningside our northern step-out Falher well has performed above expectations averaging 6 mmcf per day over its first 120 days on production. The Ferrier Notikewin and Willesden Green Glauconite wells drilled in the second quarter will be completed and brought on production late in the third quarter.

At our Strachan Glauconite play, the construction of our compression and pipeline infrastructure to an alternate processing facility has been completed and the majority of our production has been diverted since the end of June. We are currently drilling the fourth well of our five well program and will complete all five wells throughout the second half of the year. This new low-cost processing solution combined with approximately 50 barrels per mmcf of natural gas liquids (weighted 50% to condensate) will result in some of the most economic development wells for Bonavista in 2018. With approximately 100 Strachan Glauconite drilling locations in our prospect inventory, 80% of which are un-booked, this area has significant potential for value appreciation in the current price environment.

For the remainder of the year, nearly 70% of the remaining E&D spending will be allocated to our liquid rich plays in our West Central core area. Approximately $46 million will be spent to drill nine (9.0 net) wells in our most economic plays at Strachan and Morningside.

Notwithstanding the continued volatility we are experiencing with western Canadian natural gas prices, the broader supply and demand fundamentals have become more constructive. A warmer than expected shoulder season coupled with above average temperatures this summer across much of North America has resulted in stronger than anticipated demand for natural gas.

Specific to the U.S., natural gas demand continues to exhibit structural growth characteristics. Significant demand for cooling has caused power demand in the U.S. to track near record highs, approaching 40 bcf per day recently and average 26.7 bcf per day year-to-date, a 10% increase relative to the same period last year. Natural gas export volumes remain strong, with export volumes via pipeline to Mexico growing 12% year over year in June to average 4.5 bcf per day and recently growing above 5 bcf per day in the first two weeks of July.

Lastly, liquefied natural gas (“LNG”) exports are expected to remain in excess of 3 bcf per day for the remainder of this year with the total liquefaction capacity of the U.S. scheduled to multiply three-fold to approximately 9 bcf per day within the next 24 to 30 months. Collectively, and despite record natural gas supply, these events have moderated the natural gas storage inventory in the U.S. whereby storage levels are currently 24% below last year’s levels. Fortunately, this demand for natural gas in the U.S. has also elevated the call for natural gas volumes from Canada to 5.5 bcf per day year-to-date, an eight percent increase above last year’s levels over the same period.

In Canada, natural gas demand has been robust year-to-date, supported by weather, continued growth in oilsands consumption and the accelerated decommissioning of coal-fired electricity generation. Remarkably, natural gas consumption to generate electricity in Alberta is scheduled to grow 40% to 800 mmcf per day in 2018 relative to 2017. These events, along with curtailed access to storage in Alberta, has created a 24% deficit to Canadian storage levels relative to last year. With over half of the injection season behind us, this should support western Canadian natural gas pricing into the winter heating season.

Longer term, optimism is building with LNG export potential, specifically LNG Canada located on the west coast of Canada. Provincial tax incentives, service contracts announcements, hiring showcases and onsite activity all point to a constructive final investment decision (FID) announcement early this fall. It is becoming much clearer that Canada can compete in the global LNG market at a time when the market is poised to absorb new supply. A positive FID announcement with LNG Canada will act as a catalyst to grow LNG export capacity in Canada beyond this project creating incremental long-term natural gas demand.

We believe Bonavista remains well positioned to create long-term value for our shareholders in light of these constructive natural gas fundamentals. Having said that, we will remain disciplined with what we control in the current low-margin price environment as we prepare to adapt to the changing fundamentals.

We will be allocating the majority of our remaining E&D spending this year to opportunities rich in NGLs designed to maximize netback while we maintain production levels and generate excess funds flow. In support of the capital program, we continue to enhance the quality of our asset portfolio through strategic asset swaps and acquisitions and the application of technology. Our full year capital program remains on target between $135 and $155 million, generating an annual production forecast of between 69,000 and 71,000 boe per day and excess adjusted funds flow between $70 and $90 million.

We thank our employees for their commitment and dedication and our shareholders for their on-going support. We look forward to creating additional financial flexibility throughout the remainder of 2018.

Non-GAAP Measures – The Corporation uses terms that are commonly used in the oil and natural gas industry, but do not have any standardized meaning as prescribed by IFRS and therefore may not be comparable with the calculations of similar measures for other entities. Management believes that the presentation of these Non-GAAP Measures provide useful information to investors and shareholders as the measures provide increased transparency and the ability to better analyze performance against prior periods on a comparable basis.

Oil and Gas Advisories – To provide a single unit of production for analytical purposes, natural gas production and reserves volumes are converted mathematically to equivalent barrels of oil (boe). We use the industry-accepted standard conversion of six thousand cubic feet of natural gas to one barrel of oil (6 Mcf = 1 bbl). The 6:1 boe ratio is based on an energy equivalency conversion method primarily applicable at the burner tip. It does not represent a value equivalency at the wellhead and is not based on either energy content or current prices. While the boe ratio is useful for comparative measures and observing trends, it does not accurately reflect individual product values and might be misleading, particularly if used in isolation. As well, given that the value ratio, based on the current price of crude oil to natural gas, is significantly different from the 6:1 energy equivalency ratio, using a 6:1 conversion ratio may be misleading as an indication of value.

Forward-Looking Statements – Bonavista’s interim report contains certain forward-looking information and statements within the meaning of applicable securities laws. The use of any of the words “anticipate”, “expect”, “project”, “plan”, “estimate”, “budget”, “will”, “strategy”, “ongoing”, “potential”, “believe”, “continue” and similar expressions are intended to identify forward-looking information. Any “financial outlook” or “future orientated financial information” in the interim report, as defined by applicable securities laws, has been approved by the management of Bonavista. Such financial outlook or future orientated financial information is provided for the purpose of providing information about management’s current expectations and plans relating to the future. Readers are cautioned that reliance on such information may not be appropriate for other purposes.

In particular, but without limiting the foregoing, this document contains forward-looking information pertaining to the following:

By their nature, forward-looking statements are subject to numerous risks and uncertainties; some of which are beyond Bonavista’s control, including the impact of general economic assumptions and conditions, industry assumptions and conditions, volatility of commodity prices, currency fluctuations, imprecision of reserve estimates, environmental risks, changes in environmental tax and royalty legislation, competition from other industry participants, the lack of availability of qualified personnel or management, stock market volatility and ability to access sufficient capital from internal and external sources. Readers are cautioned that the assumptions used in the preparation of such information, although considered reasonable at the time of preparation, may prove to be imprecise and, as such, undue reliance should not be placed on forward-looking statements. Bonavista’s actual results, performance or achievement could differ materially from those expressed in, or implied by, these forward-looking statements or if any of them do so, what benefits that Bonavista will derive there from. Bonavista disclaims any intention or obligation to update or revise any forward-looking statements, whether as a result of new information, future events or otherwise, except as required by law.