CALGARY, April 23, 2019 /CNW/ – Bonavista Energy Corporation (“Bonavista”) announces that it has approved an amendment to its Restricted Incentive Award Plan and Performance Incentive Award Plan (collectively, “the Plans”) to reduce the aggregate number of common shares available to be issued under both the Plans to a rolling 5.4% of our outstanding common shares, including common shares issuable upon the exchange of exchangeable shares (the “Amendment”) which meets the amount needed to satisfy existing grants. The Amendment has been enacted in order to ensure that the aggregate shareholder value transfer (“SVT”) under the Plans do not exceed the cap on SVT as recently recommended by Institutional Shareholder Services (“ISS”).  We believe that the Amendment will reduce the SVT under the Plans, in aggregate, to be at or less than the 6% SVT cap set by ISS.  The Amendment will be voted upon at the upcoming annual and special meeting of the shareholders of Bonavista to be held at 3:00 pm MDT on May 2, 2019. 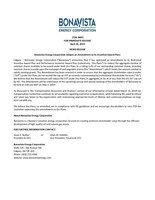 As discussed in the “Compensation Discussion and Analysis” section of our information circular dated March 15, 2019 our Compensation Committee continues to act prudently regarding executive compensation, while balancing the need to attract and retain key talent to the organization with maintaining appropriate levels of dilution and continued emphasis on long‐term variable pay.

We believe the Plans, as amended, are in compliance with ISS guidelines and we encourage shareholders to vote FOR the resolution approving the amendments to the Plans.