Inter Pipeline generated first quarter of 2019 funds from operations of $211.5 million, $42.7 million lower than the first quarter of 2018. The decrease was primarily the result of lower performance in the NGL processing business, which was impacted by lower frac-spread pricing. Reduced FFO in our conventional oil gathering business also contributed to the year over year decline.

“During the first quarter, our oil sands transportation business continued to generate strong, stable cash flow and financial results from European storage improved meaningfully with the addition of the recently acquired UK and Amsterdam terminals,” commented Christian Bayle, Inter Pipeline’s President and Chief Executive Officer. “Our NGL processing business did face several challenges in the quarter however, including a much weaker commodity pricing environment.

“We were pleased to complete our inaugural issuance of $750 million hybrid notes, which is an important financing instrument for our Heartland Petrochemical Complex. Construction work on this transformational project continues to proceed safely, on time and on budget.”

Inter Pipeline’s payout ratio for the quarter was 82.2 percent.

Inter Pipeline’s oil sands transportation business delivered strong financial results in the first quarter 2019. Funds from operations were $147.6 million during the quarter, in line with $148.9 million during the same period in 2018.

Construction of the new $110 million diluent and bitumen blend connection to the Canadian Natural Kirby North oil sands project continues to advance with an expected in-service date of mid-2019, approximately six months ahead of schedule. When completed, the new connection will provide highly stable, long term cash flow to Inter Pipeline which is not dependent on actual volume shipped.

NGL processing generated $68.0 million in funds from operations during the first quarter of 2019, down from $98.6 million a year ago. This result was primarily due to lower frac spreads for natural gas and offgas liquids and higher fuel and power costs. In addition, sales at the Redwater Olefinic Fractionator were negatively impacted by rail logistic issues and a change in the timing of revenue recognition related to polymer grade propylene sales.

Natural gas processed at the Cochrane and Empress straddle plants during the quarter increased to 3.86 billion cubic feet per day, an increase of 400 million cubic feet per day over the comparable period in 2018. Approximately 121,700 b/d of ethane and propane-plus was extracted during the quarter, an increase of 11,200 b/d compared to the first quarter of 2018. Average sales volume from the Redwater Olefinic Fractionator increased to 35,500 b/d for the quarter, representing an eight percent increase over the first quarter of 2018.

In the first quarter of 2019, $232.4 million was invested in construction activities for the Heartland Petrochemical Complex, bringing the total capital incurred to approximately $1.3 billion.

In early January, Inter Pipeline and Mammoet collaborated to successfully transport four large vessels from fabrication shops in Edmonton, Alberta to the construction site. This milestone included the shipment of the propane propylene splitter and the polypropylene reactor which are core components of the Complex. Additional modules continue to arrive at site as construction on the propane dehydrogenation plant progresses. The piling program for the integrated polypropylene plant is also well underway in advance of the summer construction season.

In March 2019, Inter Pipeline was awarded $49 million through the Government of Canada’s Strategic Innovation Fund, a program designed to support new business investment in Canada.

Funds from operations for Inter Pipeline’s conventional oil pipelines business segment were $34.1 million during the first quarter of 2019, compared to $50.7 million a year ago.

Volume on Inter Pipeline’s three conventional gathering systems averaged 187,100 b/d for the first quarter, a decrease of 22,300 b/d over the first quarter of 2018 and slightly higher than the prior quarter. Volume on the Central Alberta pipeline system increased by 5,700 b/d to 29,700 b/d and Bow River volume increased by 9,900 b/d to 98,200 b/d. Volume on the Mid-Saskatchewan pipeline system decreased 38,000 b/d to 59,200 b/d in the quarter due to increased competition in the region and downstream apportionment issues.

The $82 million Stettler expansion project on the Central Alberta pipeline system continues to advance towards a first-phase in service date of mid-2019. When fully complete in mid-2020, the expanded facility will service growing production from the East Duvernay light oil basin and other emerging oil plays and is expected to generate approximately $20 million in incremental annual EBITDA.

Inter Pipeline’s bulk liquid storage business generated funds from operations of $26.8 million in the quarter, a $8.1 million improvement over the first quarter of 2018. The first quarter of 2019 included $8.4 million of FFO from our recently acquired bulk liquid storage business in the United Kingdom and the Netherlands, which operated at a 95 percent utilization rate.

During the first quarter of 2019, the average storage utilization rate across all terminals was 78 percent compared to 82 percent for the same period in 2018, and 68 percent in the prior quarter. A backwardated pricing environment for certain petroleum products continues to impact utilization rates, particularly at our Danish terminals. However, several new storage agreements were executed in this quarter which has materially improved utilization rates in Denmark and customer interest remains strong in advance of new ship bunker fuel regulations that come into effect in January 2020.

As at March 31, 2019, Inter Pipeline had approximately $1.1 billion of capacity on its $1.5 billion revolving credit facility and a consolidated net debt to total capitalization ratio* of 44.2 percent compared to 51.8 percent at December 31, 2018.

About Inter Pipeline Ltd.
Inter Pipeline is a major petroleum transportation, natural gas liquids processing, and bulk liquid storage business based in Calgary, Alberta, Canada. Inter Pipeline owns and operates energy infrastructure assets in western Canada and Europe. Inter Pipeline is a member of the S&P/TSX 60 Index and its common shares trade on the Toronto Stock Exchange under the symbol IPL.  www.interpipeline.com 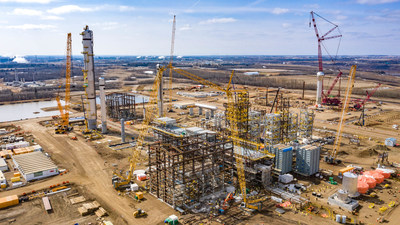