VANCOUVER, BC / ACCESSWIRE / November 13, 2019 / AZARGA METALS CORP. (“Azarga Metals” or the “Company“) (TSXV:AZR) reports the ongoing diamond drilling program on its Unkur Copper-Silver Project in Eastern Russia is making good progress with over 1,000 meters completed to date of the 6,000 meter program. Two recent drill holes numbered AM19-002 and AM19-003b which were drilled at Unkur Southeast target, two kilometers southeast of the current Inferred Resource (see Figure 1 below) intercepted copper sulphide mineralization. This is an area that was identified by the recently completed magnetic survey and appears to verify the interpretation that mineralization at Unkur is located between magnetic highs and magnetic lows (see details in October 17, 2019 news release).

Dr. Alexander Yakubchuk, VP Exploration observed the core from these two drill holes and said: “The copper sulphide seen in drill holes AM19-002 and AM19-003b are encouraging and appear to support our interpretation of the recent geophysical surveys. If the assay results show significant copper and silver grade, this will extend the known envelope of mineralization quite some distance to the southeast at Unkur and bodes well for the drilling of other areas extending over several kilometers identified as drill targets in the magnetic survey.” 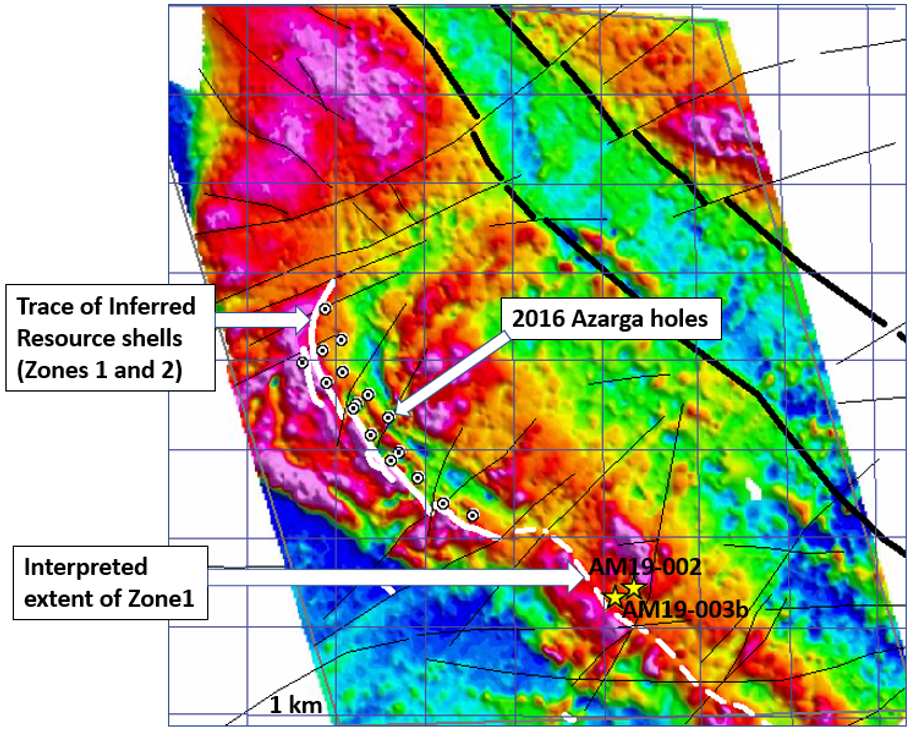 The copper sulphide minerals seen in drill holes AM19-002 and AM19-003b are dominated by chalcopyrite visually logged between 310 to 355 meters (45 meter interval) in drill hole AM19-002 and between 158 and 210 meters (52 meter interval) in AM19-003b, with bornite and chalcocite also observed over narrow intervals of 5 meters in each of the holes. These two holes were drilled on the same cross-section (see Figure 2 below) and the thicker intersection of mineralization seen in AM19-003b suggests that the mineralized zone is becoming thicker up-dip – closer to the surface. The Unkur Southeast mineralization seen in these holes is interpreted by Azarga Metals geological staff as occurring at the same stratigraphic level as Zone 1 in the current Inferred Resource which was emplaced at the top of the magnetite-enriched sandstone and is therefore interpreted as a southeastern extension of Zone 1. 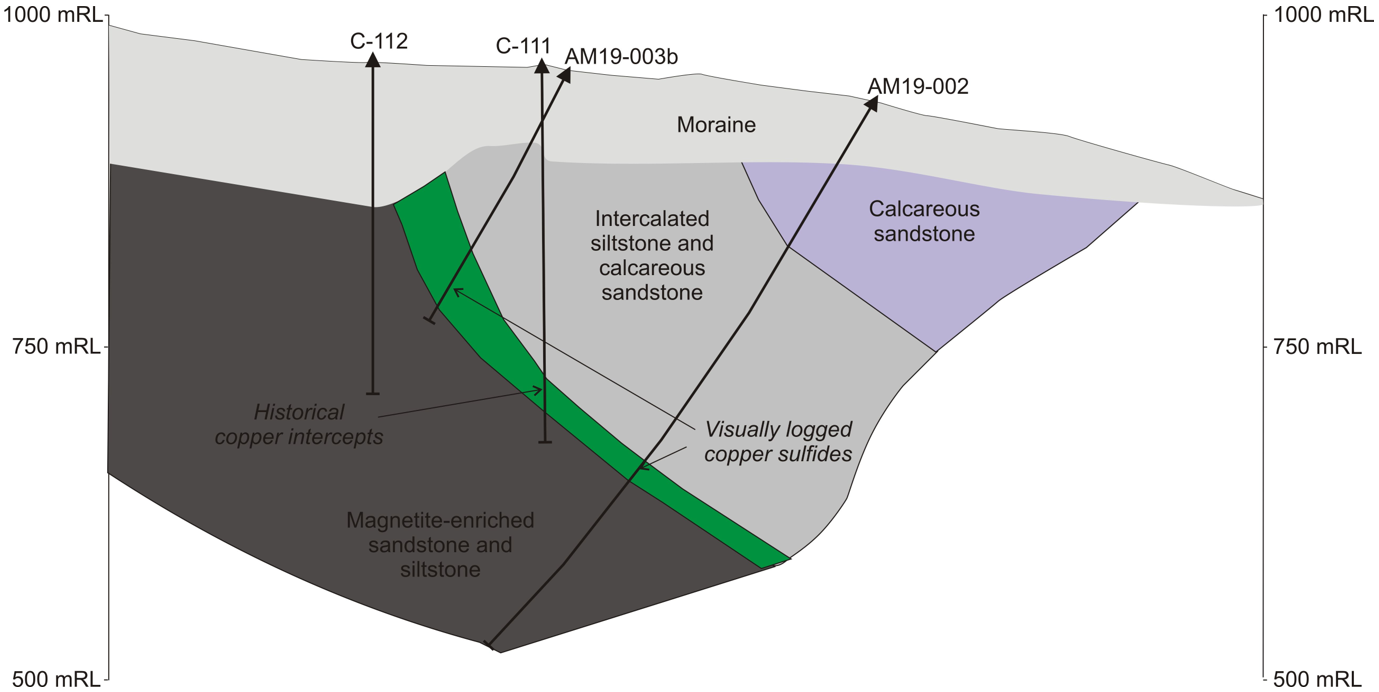 Figure 2. Stylized preliminary cross-section through drill holes AM19-002 and AM19-003b, showing hosting lithologies and configuration of the copper sulphide envelope based on visual logging and historical drill holes C-111 and C-112.

First assays from the current Unkur drilling program are expected to be received in mid-December 2019 and given the scale of the overall program, drilling is expected to continue through the first quarter of 2020.

Michael Hopley (President and CEO) and Dr. Alexander Yakubchuk (VP Exploration) will be meeting investors at the 121 Mining Investment conference in London on November 20 and 21st.

Azarga Metals' President and CEO Michael Hopley, a Qualified Person as defined by NI 43-101, verifies the data disclosed and has reviewed and approved the disclosure contained in this Press Release.

Azarga Metals is a mineral exploration and development company that owns 100% of the Unkur Copper-Silver Project in the Zabaikalsky administrative region in eastern Russia. On completion of a first phase physical exploration program in 2016-2018, the Company estimated an Inferred Resource of 62 million tonnes at 0.53% copper and 38.6g/t silver for the project in the report entitled “Technical Report and Preliminary Economic Assessment for the Unkur Copper-Silver Project, Kodar-Udokan, Russian Federation” dated effective 30, August 2018 authored by Tetra Tech Mining & Minerals. The Resource remains open in both directions along strike and down-dip.