CALGARY, Dec. 18, 2019 /CNW/ – Gear Energy Ltd. (“Gear“) (TSX: GXE) is pleased to announce that Gear's Board of Directors have approved a $50 million capital budget for 2020 targeting further growth in funds from operations (“FFO”) per debt adjusted share through a strategic balance between production stability, continued improvement of the strong balance sheet and additional purchases of Gear's common shares under the Normal Course Issuer Bid (“NCIB”). The Gear team will maintain focus on strong rate of return capital projects from within the deep drilling inventory of over 600 potential locations. Through 2020 Gear intends to invest in a low risk drilling program that is well-diversified across its three core areas. 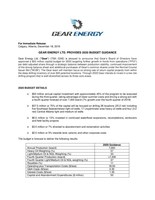 The budget is forecast to deliver the following results:

The 2020 budget was modelled with a price forecast of WTI US$58/bbl, WCS differential of US$15.50/bbl, MSW and LSB differentials of US$5.75/bbl, AECO gas price of C$1.85/GJ and a foreign exchange of 0.76. Under these assumptions, Gear is forecast to deliver:

The Gear team intends to remain flexible and opportunistic with regards to this capital plan, keeping a close eye on the commodity market and being prepared to expand or reduce investments if pricing or physical egress changes materially.

This press release contains certain forward-looking information and statements within the meaning of applicable securities laws. The use of any of the words “expect”, “anticipate”, “continue”, “estimate”, “objective”, “ongoing”, “may”, “will”, “project”, “should”, “believe”, “plans”, “intends”, “strategy” and similar expressions are intended to identify forward-looking information or statements. In particular, but without limiting the foregoing, this press release contains forward-looking information and statements pertaining to the following: expected details of the 2020 capital budget including expected capital expenditures; expectation that the budget will provide a strategic balance between production stability, continued improvement of the strong balance sheet and a further reduction in the number of outstanding shares; the intent to focus on strong rate of return capital projects from within Gear's drilling inventory; the expected number of potential drilling locations; the intent in 2020 to invest in a low risk drilling program that is well-diversified across its three core areas; the expected timing for spending capital in 2020; the expected allocation of capital in 2020; guidance relating to the 2020 budget including expected average production and commodity weighting, royalties, operating and transportations costs, general and administrative costs, interest costs and capital and abandonment expenditures; the expectations associated with the 2020 capital including with respect to production and reserves, FFO and free FFO, the opportunity to direct a portion of the free FFO towards the continued repurchase and cancelation of outstanding shares and the number of wells and other lease and facility abandonment and/or reclamation to the be completed; and the intent of the Gear team to remain flexible and opportunistic with regards to this capital plan depending on commodity prices and ability to transport commodities. The forward-looking information and statements contained in this press release reflect several material factors and expectations and assumptions of Gear including, without limitation: that Gear will continue to conduct its operations in a manner consistent with past operations; the general continuance of current industry conditions; the continuance of existing (and in certain circumstances, the implementation of proposed) tax, royalty and regulatory regimes; the accuracy of the estimates of Gear's reserves and resource volumes; certain commodity price and other cost assumptions; the ability of Gear to get approvals from its lenders under its credit facilities to make purchases of its shares; and the continued availability of adequate debt and equity financing and funds from operations to fund its planned expenditures. Gear believes the material factors, expectations and assumptions reflected in the forward-looking information and statements are reasonable, but no assurance can be given that these factors, expectations and assumptions will prove to be correct. To the extent that any forward-looking information contained herein may be considered a financial outlook, such information has been included to provide readers with an understanding of management's assumptions used for budgeting and developing future plans and readers are cautioned that the information may not be appropriate for other purposes. The forward-looking information and statements included in this press release are not guarantees of future performance and should not be unduly relied upon. Such information and statements involve known and unknown risks, uncertainties and other factors that may cause actual results or events to differ materially from those anticipated in such forward-looking information or statements including, without limitation: changes in commodity prices; changes in the demand for or supply of Gear's products; unanticipated operating results or production declines; changes in tax or environmental laws, royalty rates or other regulatory matters; changes in development plans of Gear or by third party operators of Gear's properties, increased debt levels or debt service requirements; inaccurate estimation of Gear's oil and gas reserve and resource volumes; limited, unfavorable or a lack of access to capital markets; increased costs; a lack of adequate insurance coverage; the impact of competitors; the risk that Gear is unable to get approvals from its lenders as necessary under its credit facilities to make purchases of its shares; the risk that Gear's lenders take actions that reduce availability of, or require repayment of, borrowings under Gear's credit facilities;  and certain other risks detailed from time to time in Gear's public documents including in Gear's most current annual information form which is available on SEDAR at www.sedar.com.

The forward-looking information and statements contained in this press release speak only as of the date of this press release, and Gear does not assume any obligation to publicly update or revise them to reflect new events or circumstances, except as may be required pursuant to applicable laws.

This press release contains the terms funds from operations, net debt, exit net debt to funds flow from operations, free funds flow and free funds flow yield, which do not have standardized meanings under Canadian generally accepted accounting principles (“GAAP”) and therefore may not be comparable with the calculation of similar measures by other companies. Management believes that these key performance indicators and benchmarks are key measures of financial performance for Gear and provide investors with information that is commonly used by other oil and gas companies. Funds from operations is calculated as cash flows from operating activities before changes in non-cash operating working capital and decommissioning liabilities settled. Net debt is calculated as debt less current working capital items, excluding risk management contracts and the current portion of decommissioning liabilities. Exit net debt to funds from operations is calculated as net debt divided by the funds from operations for the most recently completed year (or for such other year for which such measurement is provided for). Debt adjusted shares are calculated by the weighted average shares plus the share equivalent on Gear's average net debt over the period, assuming that the debt were to be extinguished with a share issuance based on the weighted average share price in the period. Management presents certain other metrics on a per unit (or boe) basis. Per unit basis is calculated by the dividing the metric by the average production in a period. For additional information on the use of these measures including reconciliations to the most directly comparable GAAP measures, if any, and their pertinent relevance, please see Gear's most recent Management's Discussion and Analysis on Gear's profile at www.sedar.com.

This press release discloses Gear's expectations of future drilling locations. While certain of these estimated drilling locations may be consistent with “booked” drilling locations identified in Gear's most recent independent reserves report (the “Sproule Report“) as prepared by Sproule Associates Limited (“Sproule“) effective December 31, 2018, as having associated proved and/or probable reserves, other locations are considered “unbooked” as they have no associated proved and/or probable reserves in the Sproule Report or any associated resources other than reserves. Of the over 600 management estimated drilling locations (as at Dec 31, 2018), 108 and 187 were booked as proved and proved plus probable locations, respectively. Unbooked locations are internal estimates based on Gear's prospective acreage and an assumption as to the number of wells that can be drilled per section based on industry practice and internal review. Unbooked locations have been identified by management as an estimation of our multi-year drilling activities based on evaluation of applicable geologic, seismic, engineering, production, pricing assumptions and reserves information. There is no certainty that Gear will drill all drilling locations identified herein and if drilled there is no certainty that such locations will result in additional oil and gas reserves, resources or production. The drilling locations on which Gear actually drill wells will ultimately depend upon the availability of capital, regulatory approvals, seasonal restrictions, oil and natural gas prices, costs, actual drilling results, additional reservoir information that is obtained and other factors. While the majority of Gear's unbooked locations are extensions or infills of the drilling patterns already recognized by Gear's independent evaluator, other unbooked drilling locations are farther away from existing wells where management has less information about the characteristics of the reservoir and therefore there is more uncertainty whether wells will be drilled in such locations and if drilled there is more uncertainty that such wells will result in additional oil and gas reserves, resources or production.

Disclosure provided herein in respect of BOEs may be misleading, particularly if used in isolation. A BOE conversion ratio of six Mcf to one Bbl is based on an energy equivalency conversion method primarily applicable at the burner tip and do not represent a value equivalency at the wellhead. Additionally, given that the value ratio based on the current price of crude oil, as compared to natural gas, is significantly different from the energy equivalency of 6:1; utilizing a conversion ratio of 6:1 may be misleading as an indication of value.