CALGARY, AB, March 25, 2021 /CNW/ – Surge Energy Inc. (“Surge” or the “Company”) (TSX: SGY) is pleased to announce it has successfully completed its previously announced strategic $106 million asset sale (the “Sale”), and finalized a positive re-determination of the Company’s credit facilities. 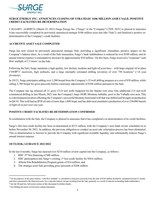 Surge has now closed its previously announced strategic Sale, providing a significant, immediate, positive impact on the Company’s balance sheet. As a result of the Sale transaction, Surge’s bank indebtedness is reduced by over $100 million, and its annual interest expense is anticipated to decrease by approximately $10 million.  On this basis, Surge received a “corporate” cash flow multiple of 5.3 times1 on the Sale.

In 1H/21, Surge anticipates adding over 3,200 boepd from the Company’s 32 well drilling program at a cost of $39 million, while selling 2,700 boepd for gross proceeds (before customary adjustments) of $106 million pursuant to the Sale.

The Company has rig released all 31 gross (31.0 net) wells budgeted for the Sparky core area. One additional (1.0 net) well commenced drilling in late March, 2021 into the Company’s large OOIP, Montney turbidite, pool in the Valhalla core area. This is a development location offsetting the Company’s successful Montney horizontal well that was drilled and brought on production in Q4/19. This well had an IP30 oil rate of more than 1,000 bopd, and has delivered cumulative production of over 230,000 barrels of light oil in just over one year.

In combination with the Sale, the Company is pleased to announce that it has completed a re-determination of its credit facilities.

Surge’s first lien credit facility has been re-determined at $215 million, with the Company’s next bank review scheduled on or before November 30, 2021. In addition, the previous obligation to conduct an asset sale solicitation process has been eliminated. This re-determination is forecast to provide the Company with significant available liquidity, and substantially reduces Surge’s annual interest expense.

In the last 4 months, Surge has injected over $210 million of new capital into the Company, as follows:

As a result of the top tier production efficiencies associated with the Company’s 1H/21 drilling program, Surge expects to add over 3,200 boepd for total capital expenditures of $39 million. Surge anticipates a payout on this 32 well program of less than one year at current strip oil prices4.

Following the successful, accretive Sale, and the completion of the Company’s low risk 1H/21 development drilling program, Surge is planning a disciplined capital allocation strategy with an emphasis on free cash flow generation in 2H/21. Surge will be issuing revised guidance following the completion of the final Montney well in the 1H/21 drilling program, and the optimization of the new, recently drilled 31 Sparky wells. Accordingly, the Company anticipates releasing this updated guidance on or before April 30, 2021.

More particularly, this press release contains statements concerning: Management’s expectations and plans with respect to the development of its assets and the timing thereof; Surge’s declared focus and primary goals and its strategy for 2H/21; Surge’s planned drilling program  and the anticipated costs thereof and payout thereunder; Surge’s drilling inventory and locations; management’s expectations regarding 2021 production levels; the expectation that the Sale will further enhance the Company’s financial flexibility and available liquidity; the anticipated benefits of the re-determination of Surge’s credit facilities, including the anticipated reduction in Surge’s annual interest expense; and the anticipated timing of release of revised 2021/22 guidance.

The forward-looking statements are based on certain key expectations and assumptions made by Surge, including expectations and assumptions the performance of existing wells and success obtained in drilling new wells; anticipated expenses, cash flow and capital expenditures; the application of regulatory and royalty regimes; prevailing commodity prices and economic conditions; development and completion activities; the performance of new wells; the successful implementation of waterflood programs; the availability of and performance of facilities and pipelines; the geological characteristics of Surge’s properties; the successful application of drilling, completion and seismic technology; the determination of decommissioning liabilities; prevailing weather conditions; exchange rates; licensing requirements; the impact of completed facilities on operating costs; the availability and costs of capital, labour and services; and the creditworthiness of industry partners.

Although Surge believes that the expectations and assumptions on which the forward-looking statements are based are reasonable, undue reliance should not be placed on the forward-looking statements because Surge can give no assurance that they will prove to be correct. Since forward-looking statements address future events and conditions, by their very nature they involve inherent risks and uncertainties. Actual results could differ materially from those currently anticipated due to a number of factors and risks. These include, but are not limited to, risks associated with the condition of the global economy, including trade, public health (including the impact of COVID-19) and other geopolitical risks; risks associated with the oil and gas industry in general (e.g., operational risks in development, exploration and production; delays or changes in plans with respect to exploration or development projects or capital expenditures; the uncertainty of reserve estimates; the uncertainty of estimates and projections relating to production, costs and expenses, and health, safety and environmental risks); commodity price and exchange rate fluctuations and constraint in the availability of services, adverse weather or break-up conditions; uncertainties resulting from potential delays or changes in plans with respect to exploration or development projects or capital expenditures; and failure to obtain the continued support of the lenders under Surge’s bank line. Certain of these risks are set out in more detail in Surge’s AIF dated March 9, 2021 and in Surge’s MD&A for the year ended December 31, 2020, both of which have been filed on SEDAR and can be accessed at www.sedar.com.

This press release contains certain oil and gas metrics and defined terms which do not have standardized meanings or standard methods of calculation and therefore such measures may not be comparable to similar metrics/terms presented by other issuers and may differ by definition and application. All oil and gas metrics/terms used in this document are defined below:

Original Oil in Place (“OOIP”) means Discovered Petroleum Initially In Place (“DPIIP”). DPIIP is derived by Surge’s internal Qualified Reserve Evaluators (“QRE”) and prepared in accordance with National Instrument 51-101 and the Canadian Oil and Gas Evaluations Handbook (“COGEH”). DPIIP, as defined in COGEH, is that quantity of petroleum that is estimated, as of a given date, to be contained in known accumulations prior to production. The recoverable portion of DPIIP includes production, reserves and Resources Other Than Reserves (ROTR). OOIP/DPIIP and potential recovery rate estimates are based on current recovery technologies. There is significant uncertainty as to the ultimate recoverability and commercial viability of any of the resource associated with OOIP/DPIIP, and as such a recovery project cannot be defined for a volume of OOIP/DPIIP at this time. “Internally estimated” means an estimate that is derived by Surge’s internal QRE’s and prepared in accordance with National Instrument 51-101 – Standards of Disclosure for Oil and Gas Activities. All internal estimates contained in this new release have been prepared effective as of Jan 1, 2021.

Unbooked locations are internal estimates based on prospective acreage and assumptions as to the number of wells that can be drilled per section based on industry practice and internal review. Unbooked locations do not have attributed reserves or resources. Unbooked locations have been identified by Surge’s internal certified Engineers and Geologists (who are also Qualified Reserve Evaluators) as an estimation of our multi-year drilling activities based on evaluation of applicable geologic, seismic, engineering, production and reserves information. There is no certainty that the Company will drill all unbooked drilling locations and if drilled there is no certainty that such locations will result in additional oil and gas reserves, resources or production. The drilling locations on which the Company actually drills wells will ultimately depend upon the availability of capital, regulatory approvals, seasonal restrictions, oil and natural gas prices, costs, actual drilling results, additional reservoir information that is obtained and other factors. While certain of the unbooked drilling locations have been de-risked by drilling existing wells in relative close proximity to such unbooked drilling locations, the majority of other unbooked drilling locations are farther away from existing wells where management has less information about the characteristics of the reservoir and therefore there is more uncertainty whether wells will be drilled in such locations and if drilled there is more uncertainty that such wells will result in additional oil and gas reserves, resources or production.

Surge’s weighted average internal Sparky type curve economics have an IRR of greater than 115% and a payout of under one year @ US$55/bbl WTI (C$56 WCS) and are supported by >380 internally evaluated Sparky locations by Surge’s Qualified Reserve Evaluators (with weighted average metrics of: ~$1.15 MM per well capital, ~100 boe/d IP180 per well and ~125 mboe Estimated Ultimate Recoverable reserves per well).

Surge’s internally used type curves were constructed using a representative, factual and balanced analog data set, as of January 1, 2021. All locations were risked appropriately, and EUR’s were measured against OOIP estimates to ensure a reasonable recovery factor was being achieved based on the respective spacing assumption. Other assumptions, such as capital, operating expenses, wellhead offsets, land encumbrances, working interests and NGL yields were all reviewed, updated and accounted for on a well by well basis by Surge’s Qualified Reserve Evaluators. All type curves fully comply with Part 5.8 of the Companion Policy 51 – 101CP.

Neither the TSX nor its Regulation Services Provider (as that term is defined in the policies of the TSX) accepts
responsibility for the adequacy or accuracy of this release.