TORONTO – Canada Energy Partners Inc. (NEX: CE.H) (the “Corporation”) today announced a private placement to secure up to $23.5M from the issuance of units. Each unit will consist of a common share at an issuance price of $0.10/share. In the event that the Corporation secures debt financing under customary commercial terms, the amount of the offering will be reduced.

The Corporation also announces that it has been granted conditional approval by the TSX Venture Exchange (“Exchage”) to complete the previously announced acquisition of 70% working interests in three natural gas development wells to be drilled in the Grand Slam Project, 93 miles southwest of Houston, Texas. The Corporation is required to contribute U$13.5M to fund the capital costs for completing the drilling program.

The Corporation has executed a Participation Agreement (“PA”) and Joint Operating Agreement with Arcadia Operating, LLC (“Arcadia”) and the Standard Mutual Assurance Company, LLC to drill three development wells on the Grand Slam oil and gas production leases in Matagorda County, Texas. The Grand Slam field is located 90 miles SW of Houston and the three proposed well sites are in the middle of existing oil and gas infrastructure, pipelines and gathering stations. The Grand Slam field entered production in 2000 and has a history of prolific production.

The fundamental terms of the PA are as follows: (i) the Corporatoin will advance USD$13.5M to acquire interests in the three development wells; (ii) upon commencement of production, the Corporation will receive first priority to 70.74% of the net production revenues; and (iii) upon repayment of the Corporation’s capital contributions, the working interest entitlements will be adjusted to 53.06%.

Grand Slam (Figure 1) offers and attractive opportunity to acquire 53.06% working interest by drilling three (3) development wells in the thickest portion of the Claughton A&B reservoirs (Frio Fm), that will recover ~21 BCF & 647,000 Bbls of gross reserves at a total capital expenditure of approximately $13.5 million. Each new well is estimated to cost ~$4.7 million to drill and complete (D&C). It is expected the new wells will produce a balance mix of gas (85%) and liquids (15%), providing a high-margin stable cashflow. Arcadia is the non-operated partner and brings nearly 100 years of operating experience in the basin.

Grand Slam is a liquid-rich gas field discovered in 2000 by the completion of the Runnells Gas Unit Well No.3. The discovery well initially produced 22 MMscfpd. Located in the heart of the Frio trend wedged between several large gulf coast fields 90 miles SWof Houston in Matagorda County. Grand Slam is covered by proprietary 3D seismic, it produced ~21 BCF of gas and 665,000 Bbls of condensate, out of seven wells within the leased acreage (704 acres). Historically, some of the wells had an initial production (IP) ~20 MMscfpd and 620 Bcpd. (Figure 1). 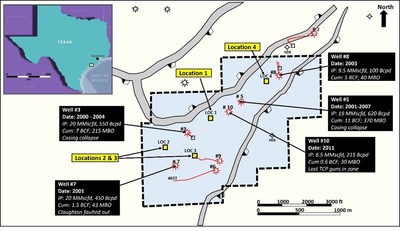 Reserves volumes reported in Table 1 are the result of a third-party reserves evaluation as of June 1, 2022, performed by Chapman Petroleum Engineering Ltd. (“Chapman”) of Calgary, Alberta and was conducted in accordance with the definitions, standards and procedures contained in the Canadian Oil and Gas Evaluators Handbook (“COGEH”) and National Instrument 51-101 – Standards for Disclosure of Oil and Gas Activities (“NI 51-101”).

The table shows the Total Proved Undeveloped (PUD), Probable (2P) and Possible (3P) reserves in Gross and Net to CEP. Chapman’s reserves evaluation only considers the proposed three (3) well development plan. Other resources could be produced with additional infill drilling locations as estimated by the Operator.

Arcadia is a 93-year-old independent Texas based oil and gas company with its antecedent founding in 1929 shortly after the discovery of the great East Texas oil field. The company which was a part of the early Texas petroleum industry pioneers was headquartered in Tyler, Texas for 61 years before moving to Dallas, Texas in 1991. The company’s operational activities have been primarily focused on the Gulf Coast, Eastern, and Southern regions of Texas where it has overseen thousands of wells in all phases of development

Three of the nine wells previously drilled on the property 10 years ago had initial flow rates of 20 mmcf of natural gas and 500 barrels of condensate liquids before two were lost to mechanical issues and the other well faulted out. In all, seven of the nine wells drilled previously flowed natural gas and concentrate liquids. With today’s natural gas and oil price structure, wells that had similar production would yield attractive returns. . Canada Energy has no way of knowing what the success rate or flow rate of any of the three wells will be but  the operator for the property, Arcadia Operating LLC of Dallas will be drilling into the exact same formation with the knowledge gained from recent 3D seismic, previous well information, and modern resivor modeling techniques.

A National Instrument 51-101Reserve Report was completed by Chapman Engineering of Calgary, Alberta for the Grand Slam Project. A copy of the Reserve Report can be downloaded fronm the company’s website.  www.canadaenergypartners.com

On behalf of the Board of Directors of
Canada Energy Partners Inc.