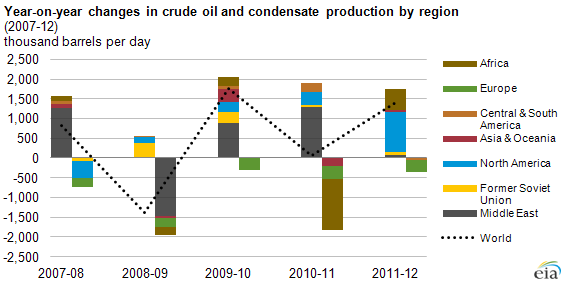 Some recent regional trends in crude oil (including lease condensate) production are described below:

Former Soviet Union: Regional production reached 12.6 million bbl/d in 2010, its highest annual level since 1988, which predated the breakup of the Soviet Union. Regional production rose by about 150,000 bbl/d to 12.7 million bbl/d between 2010 and 2012, with Russia—the world’s second largest crude oil and lease condensate producer—driving this growth. Russia’s production gains since 2009 resulted mainly from the development of eastern Siberia oil fields, use of advanced technologies and improved recovery techniques in mature fields inwestern Siberia, and development of new export infrastructure.

North America: Average annual production, which dipped to 10.4 million bbl/d in 2008, climbed to 12.2 million bbl/d by 2012. The rise in production was largely the result of rising production in tight oil formations in the United States but also includes increased bitumen and synthetic crude oil production from oil sands in Canada. Mexico’s production declined steadily.

Europe: Europe’s production has been on a downward trend since production in the North Sea began to decline before 2000. The rate of decline, which averaged 5% annually between 2000 and 2010, increased to a 9% annual decline in both 2011 and 2012. Steeper declines in 2011 and 2012 were mainly driven by a number of severe unplanned outages in the United Kingdom as well as recent increases to tax rates for the nation’s oil and gas sector.

Watch an animation video below: