Calgary, Alberta / ACCESSWIRE / January 28, 2015 / Palliser Oil & Gas Corporation (“Palliser” or the “Company“) (TSX VENTURE: PXL) would like to provide information on its oil and gas reserves as of December 31, 2014 and an operations and corporate update.

Palliser’s reserves have been independently evaluated by the Corporation’s independent reserve engineering firm, Sproule Unconventional Limited (“Sproule”). The reserves were evaluated in accordance with National Instrument 51-101 Standards of Disclosure for Oil and Gas Activities (“NI 51-101“) and the Canadian Oil and Gas Evaluation Handbook (“”COGEH“”) reserves definitions.

(1) Values shown are calculated on a before tax basis

The following benchmark prices, inflation rates and exchange rates were used by Sproule for the forecast price and cost evaluation effective December 31, 2014. 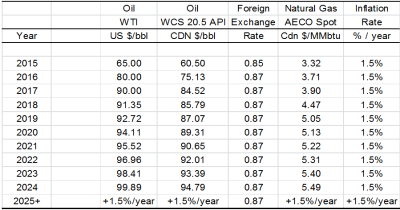 The following table summarizes Palliser’s finding, development and acquisition costs for the years ended December 31, 2014, 2013, 2012, 2011 and 2010 including future development costs. 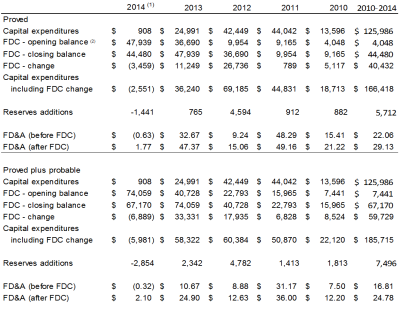 The following table summarizes Palliser’s undeveloped land holdings and the fair value of those landholdings, as at December 31, 2014 and 2013:

The reserve life index has been calculated based on year end reserves divided by fourth quarter 2014 average production of 1,181 boe per day.

Palliser achieved production of 1,181 boe/d (98% oil weighting) during the fourth quarter of 2014. The capital program for 2014 amounted to $3.8 million which was offset by $2.9 million received for disposed assets and the Company exited 2014 with net debt of $47.3 million (production and financial amounts are unaudited and subject to change).

Production in the first quarter of 2015 is forecast to drop significantly as the Company has shut in production which is not economic to produce at current oil prices. Current production is approximately 800 bpd although average reported production in January is expected to be somewhat lower due to replenishing inventories produced in December, 2014. Capital expenditures in the first quarter are forecast to be minimal and funds flow from operating activities is expected to be negatively impacted by decreases in both production and prices, resulting in increased operating costs and lower operating netbacks.

Given Palliser’s current financial position, the Company is examining any and all avenues to further improve the interests of shareholders. Options being examined include joint ventures, corporate combinations, asset sales and financing options.

Palliser is a Calgary-based emerging junior oil and gas company currently focused on heavy oil production in the greater Lloydminster area of both Alberta and Saskatchewan. For further information regarding Palliser Oil & Gas Corporation, the reader is invited to visit the Company’s website at www.palliserogc.com.

Production volumes are commonly expressed on a barrel of equivalent (“BOE”) basis whereby natural gas volumes are converted at a ratio of six thousand cubic feet to one barrel of oil. The intention is to convert oil and natural gas measurement units into one basis for improved analysis of results and comparisons with other industry participants. The term BOE may be misleading, particularly if used in isolation. The conversion ratio is based on an energy equivalent method and does not represent an economic value equivalency at the wellhead.