CALGARY, Jan. 12, 2017 /CNW/ – Altura Energy Inc. (“Altura” or the “Corporation”) (TSX Venture: ATU) is pleased to provide an operations update which includes results from a horizontal well drilled in a new Upper Mannville oil pool in the Leduc-Woodbend area of Alberta and a new Sparky oil prospect in the Macklin area on the Alberta/Saskatchewan border. 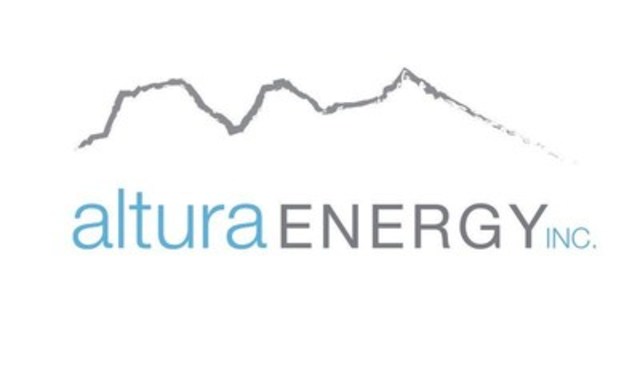 In the third quarter of 2016, Altura drilled and completed an Upper Mannville oil well in the Leduc-Woodbend area of Alberta which represents a new Upper Mannville oil pool for the Corporation. There are approximately 700 vertical wells drilled in the area that provide a means to identify and map the hydrocarbon accumulation. The region has extensive gas gathering infrastructure with year-round access.

The 100/13-15-048-26W4 horizontal exploration well was drilled in the southern region of the pool to a true vertical depth of 1,375 meters. The one-mile horizontal well was completed with a multi-stage hydraulic fracture stimulation. Drilling and completion costs totaled $1.7 million1.

The well was placed on production in the fourth quarter and the initial production rates over the first 30 and 45 producing days (IP30 and IP45 rates) are 230 boe per day and 210 boe per day, respectively, of 17° API oil, at an average water cut of 68% and gas/oil ratio of 500 scf/bbl (approximately 93% oil and liquids). The well is currently producing 160 boe per day, based on field estimates.  There is no evidence at this time of an underlying water aquifer; however, the Corporation expects water saturations to vary across the pool.

The Corporation has accumulated 50 sections of 100% WI land in the estimated pool. The land holding is comprised of approximately 50% freehold and 50% Crown leases. Overall, this land was acquired at an average cost of $80 per acre.

Altura has licensed a second well and is expected to spud in late January 2017. This well has an estimated drilling and completion cost of $1.8 million.

This new oil pool is at a very early stage of development and there is no certainty that it will be commercially viable to produce. Initial well production rates may not be indicative of longer term rates, and pool parameters may be adjusted as new data emerges.  Altura will continue to assess the prospect and delineate the opportunity. Please refer to the “Reader Advisories” section of this press release.

Altura Energy Inc. is a public oil and gas Company active in the exploration and development of oil and natural gas in east central Alberta.

This press release contains certain forward-looking information and statements within the meaning of applicable securities laws. The use of any of the words “expect”, “anticipate”, “budget”, “forecast”, “continue”, “estimate”, “objective”, “ongoing”, “may”, “will”, “project”, “should”, “believe”, “plans”, “intends”, “strategy” and similar expressions are intended to identify forward-looking information or statements.  In particular, but without limiting the foregoing, this press release contains forward-looking information and statements pertaining to the following: 2017 capital expenditure budget, including details of expected drilling and completion plans relating to such budget, risked capital efficiency and 2017 exit production rate.

The forward-looking information and statements contained in this press release reflect several material factors and expectations and assumptions of Altura including, without limitation:

Altura believes the material factors, expectations and assumptions reflected in the forward-looking information and statements are reasonable but no assurance can be given that these factors, expectations and assumptions will prove to be correct. To the extent that any forward-looking information contained herein may be considered future oriented financial information or a financial outlook, such information has been included to provide readers with an understanding of management’s assumptions used for budgeted and developing future plans and readers are cautioned that the information may not be appropriate for other purposes.

The forward-looking information and statements contained in this press release speak only as of the date of this press release, and Altura does not assume any obligation to publicly update or revise them to reflect new events or circumstances, except as may be required pursuant to applicable laws.

The term barrels of oil equivalent (“boe”) may be misleading, particularly if used in isolation.  Per boe amounts have been calculated by using the conversion ratio of six thousand cubic feet (6 mcf) of natural gas to one barrel (1 bbl) of crude oil.  The boe conversion ratio of 6 mcf to 1 bbl is based on an energy equivalency conversion method primarily applicable at the burner tip and does not represent a value equivalency at the wellhead.  Given that the value ratio based on the current price of crude oil as compared to natural gas is significantly different from the energy equivalent of 6:1, utilizing a conversion on a 6:1 basis may be misleading as an indication of value.

Any references in this press release to initial production rates are useful in confirming the presence of hydrocarbons, however, such rates are not determinative of the rates at which such wells will continue production and decline thereafter. Oil and gas formations are inherently unpredictable, particularly in the early stage of their development. Additionally, such rates may also include recovered “load oil” fluids used in well completion stimulation. While encouraging, readers are cautioned not to place reliance on such rates in calculating the aggregate production for the Corporation.

To view this news release in HTML formatting, please use the following URL: http://www.newswire.ca/en/releases/archive/January2017/12/c5966.html