Paramount has also entered into an agreement with Trilogy Energy Corp. (“Trilogy”) to merge by way of an arrangement under the Business Corporations Act (Alberta), pursuant to which Paramount would acquire all of the common shares and non-voting shares of Trilogy not already owned by Paramount in exchange for Class A common shares of Paramount on the basis of one Paramount share for every 3.75 Trilogy shares (the “Merger”).

These strategic transactions are the next steps in Paramount’s transformation following the sale of the Company’s Musreau deep cut gas processing plant and properties in 2016 and the repayment of all debt then outstanding. The Company is redeploying its cash on hand and immediately increasing its production, cash flows, reserves and landholdings.

Paramount, upon acquiring Apache Canada and merging with Trilogy, will become a Montney, Duvernay and Deep Basin focused intermediate exploration and production company with the financial strength to accelerate the development of a portfolio of top-tier resource plays, unlocking the value of the underlying resources. The integration of the three companies will generate operational synergies, optimize cost structures, offer financial flexibility and provide economies of scale. Paramount’s diversified production base will be capable of delivering repeatable, low risk growth and generating free cash flow in a variety of price environments.

Once completed, the Apache Canada Acquisition and the Merger will result in Paramount having:

“These transactions represent Paramount’s next significant resource capture, building on the transformation of the Company we initiated in 2016. We have replaced more than the liquids-rich Montney lands and reserves we sold in 2016 and acquired a suite of top-tier development opportunities,” said Jim Riddell, Paramount’s President and Chief Executive Officer.

“We believe the 46,000 Montney acres we are acquiring at Wapiti are a continuation of Paramount’s liquids-rich resource play at Karr, where our drilling and completion programs have been delivering record results for Paramount. These transactions combine Trilogy’s and Apache Canada’s complementary land positions at Kaybob, materially increasing the size of those Montney and Duvernay resource plays.

“The combination of these three organizations will result in synergies in field operations, general and administrative expenses and development capital expenditures, as well as the optimization of processing and transportation infrastructure and commitments.”

The map below outlines the location of Apache Canada’s and Trilogy’s lands in relation to Paramount’s lands: 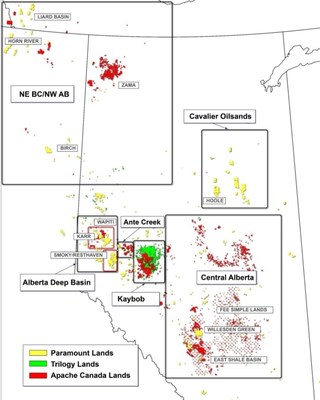 Sales volumes and netbacks for Paramount, Apache Canada and Trilogy for the three months ended March 31, 2017 are as follows:

Paramount’s independent reserves evaluator, McDaniel, updated the Company’s reserves evaluation to June 1, 2017. The Company’s proved plus probable reserves increased 27 percent to 146 MMBoe compared to 115 MMBoe as of December 31, 2016. The increase in reserves is primarily due to the performance of new wells brought on production at the Karr property in 2017.

The reserves of Apache Canada and Trilogy have also been evaluated by McDaniel as of June 1, 2017. Estimated reserves volumes are summarized as follows:

The following table summarizes the net present value of estimated future net revenue before tax of estimated reserves as at June 1, 2017:

Apache Canada is an indirect, wholly-owned subsidiary of Apache Corporation, a publicly traded U.S. based international oil and gas company. Highlights of the Apache Canada Acquisition include:

Apache Canada has recently sold its Midale and House Mountain properties and has entered into an agreement with another party to sell its Provost properties. These three properties are not part of the Apache Canada Acquisition. Apache Canada’s Wapiti area includes approximately 46,000 (45,800 net) acres of Montney rights in the core of the over-pressured, liquids-rich fairway in the Alberta Deep Basin. Paramount is ready to commence a large-scale development of these resources and add new production in mid-2019 when a new third-party processing facility is completed (the “Wapiti Montney Project”). The Company plans to develop Wapiti utilizing the well completion designs that have been successfully executed at Paramount’s Karr development. The Company expects Wapiti Montney Project natural gas volumes to increase to approximately 150 MMcf/d by 2021 as development proceeds and multi-well pads are completed and brought-on production.

The reserves evaluation for Apache Canada prepared by McDaniel includes 96 net undeveloped well locations for the Wapiti Montney Project, representing the development of approximately only 20 percent of the total Wapiti lands.

A midstream arrangement with a third-party owner/operator is in place for the turn-key Wapiti Montney Project. The first phase, scheduled for startup in mid-2019, includes 150 MMcf/d of sour gas processing capacity with acid gas injection capabilities and 25,000 Bbl/d of condensate processing capacity, as well as a gathering pipeline system and field compressor stations. Paramount will have priority access to the full 150 MMcf/d of capacity, with a take-or-pay commitment for a portion thereof. This gathering and processing arrangement allows Paramount to focus on drilling and completing wells while a third-party midstream operator concentrates on building and operating the infrastructure.

Firm-service natural gas transportation is also in place for the Wapiti Montney Project, with 50 MMcf/d of firm-service capacity available in mid-2019, which can be increased to 130 MMcf/d by 2020.

The Kaybob/Ante Creek area includes approximately 490,000 (312,000 net) acres of land targeting liquids-rich natural gas production from the Duvernay, Montney and various Cretaceous horizons, including approximately 38,000 (24,000 net) acres of core Duvernay rights. Liquids-rich growth production will be processed through a third-party turn-key midstream solution with up to 100 MMcf/d of priority processing service. Production from the Kaybob area is for the three months ended March 31, 2017 was approximately 20,000 Boe/d, including approximately 20 percent liquids volumes.

Paramount plans to pro-actively manage the other Apache Canada assets acquired in the Northwest Territories, northeast British Columbia and northwest Alberta and explore opportunities to monetize the fee simple lands and certain other properties.

The following table summarizes Apache’s Canada’s operating results for the first quarter of 2017: Trilogy discovered the Kaybob Montney oil pool in 2011 and owns approximately 32,000 net acres of land in the play. Approximately 125 wells have been drilled on the play to date. In its 2016/17 drilling program, Trilogy has tested increased proppant loading intensity with a slickwater fluid system, which has yielded results similar to the original wells drilled into the core of the pool.

In addition to its oil and gas resources, Trilogy owns a working interest in five gas plants, three major oil batteries plus an extensive gathering system in the Kaybob region.

The outstanding high yield notes of Trilogy will remain outstanding following completion of the Merger. The Merger will not trigger any change of control payments. Following the Merger, the outstanding Trilogy options will entitle the holders to acquire Paramount shares rather than Trilogy shares, based on the exchange ratio for the Merger.

Paramount is an independent, publicly traded, Canadian energy company that explores and develops unconventional and conventional petroleum and natural gas prospects, including long-term unconventional exploration and pre-development projects, and holds a portfolio of investments in other entities. The Company’s principal properties are primarily located in Alberta and British Columbia. Paramount’s Class A common shares are listed on the Toronto Stock Exchange under the symbol “POU”.

An investor presentation relating to these transactions will be posted on the Company’s website (www.paramountres.com).

In addition, information and statements herein relating to “reserves” are deemed to be forward looking information as they involve the implied assessment based on certain estimates and assumptions that the reserves described exist in the quantities predicted or estimated, and that the reserves can be profitably produced in the future.

Forward-looking information is based on a number of assumptions which may prove to be incorrect. Assumptions have been made with respect to the following matters, in addition to any other assumptions identified in this news release:

The foregoing list of risks is not exhaustive. For more information relating to risks, see the section titled “RISK FACTORS” in Paramount’s current annual information form. The forward-looking information contained in this news release is made as of the date hereof and, except as required by applicable securities law, Paramount undertakes no obligation to update publicly or revise any forward-looking statements or information, whether as a result of new information, future events or otherwise.

In this news release, “netback” and “free cash flow” (the “Non-GAAP Measures”) are used and do not have a standardized meaning as prescribed by IFRS. Netback equals petroleum and natural gas sales less royalties, operating costs and transportation and NGLs processing costs. Netback is commonly used by management and investors to compare the results of the Company’s oil and gas operations between periods.  Free cash flow equals funds flow from operations minus maintenance capital and is used to measure whether net cash flows are positive or negative after deducting capital amounts incurred to maintain production at current levels. The calculation of free cash flow excludes capital amounts incurred to increase production and capital amounts incurred in prior periods.

Oil and Gas Measures and Definitions

During the three months ended March 31, 2017, the value ratio between crude oil and natural gas was approximately 23:1. This value ratio is significantly different from the energy equivalency ratio of 6:1. Using a 6:1 ratio would be misleading as an indication of value.