WASHINGTON (AP) — For the second time this month, House Republicans have advanced a measure to restrict presidential use of the nation’s emergency oil stockpile — a proposal that has already drawn a White House veto threat. A GOP bill approved Friday would require the government to offset any non-emergency withdrawals from the Strategic Petroleum Reserve with new drilling on public lands and oceans. Republicans accuse President Joe Biden of abusing the reserve for political reasons to keep gas [Read more]

EDMONTON - Alberta's NDP says a government review of the program that's supposed to ensure oilsands companies can clean up their mines was conducted too privately and should have been done in public. Environment critic Marlin Schmidt said Albertans now know even less than before the review of the Mine Financial Security Program began. "Given how much money is at stake and how important this sector is to our economy, the fact the public was completely shut out of this process is really [Read more] CALGARY - TotalEnergies EP Canada Ltd. says it is increasing its ownership in the Fort Hills oilsands project by acquiring part of Teck Resources Ltd.'s stake in the mine. Teck announced last year that it would sell its 21.3 per cent stake in Fort Hills to Suncor Energy Inc., the third partner in the project, for about $1 billion. However, TotalEnergies EP Canada says it has exercised its pre-emption right to acquire an additional 6.65 per cent in the project from Teck for $312 [Read more] EDMONTON - Alberta is preparing to change how it ensures oilsands companies are able to pay for the mammoth job of cleaning up their operations, but critics fear a year of consultations hasn't been enough to avoid repeating past mistakes. "There's no signal to me from this government that they are going to hold industry accountable for clean-up costs," said Melody Lepine of the Mikisew Cree First Nation, one of the Indigenous groups consulted. Official estimates price that cleanup at $33 [Read more] OTTAWA - Oilsands executives insist they are all in on cutting emissions and will make big investments in green technology, but they maintain there isn't a place to invest that money yet. Many companies are coming off a year of windfall profits not because they pumped out more product, but because the war in Ukraine and global supply chain crunches pushed world oil prices way up. Environment Minister Steven Guilbeault has said repeatedly over the last year that the companies need to prove [Read more] OTTAWA - The CEOs of some of the biggest oilsands companies in Alberta say transitioning their workforce for a net-zero emissions future isn't about cutting jobs, but is about creating them. Cenovus CEO Alex Pourbaix says the consortium of oilsands behind an alliance to decarbonize their companies estimates that reaching their goal of net-zero emissions by 2050 will create 35,000 jobs. Derek Evans, CEO of MEG Energy, says he is actually worried that Canada doesn't have the labour force [Read more] 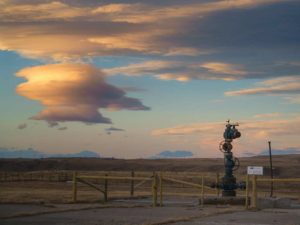 EDMONTON - Alberta's Opposition wants public consultations on a government plan that would subsidize oil and gas companies to fulfil legal commitments to clean up old wells, a major proponent of which has been working directly in Premier Danielle Smith's office for months. "The fox has entered the henhouse," said energy critic Kathleen Ganley. Ganley said that it appears the United Conservative government has already made up its mind to bring in the RStar program, despite criticism from an [Read more] EDMONTON - Premier Danielle Smith won’t commit to using Alberta's controversial sovereignty act to rebut looming federal “just transition” legislation, which she calls an existential threat to her province’s bedrock oil and gas industry. Smith says there are still unanswered questions and other options to address the federal proposal, but Alberta won't allow its oil and gas industry to be phased out of existence. She says Alberta is on board with reducing greenhouse gas emissions but it [Read more]

TORONTO - Deloitte says energy prices will likely be volatile in the first quarter of 2023 as geopolitical uncertainty continues. The firm’s energy, oil and gas price forecast released Monday says global factors including the war in Ukraine and China's rocky COVID reopening will continue to contribute to tension between supply and demand. After breaching the US$100 mark for the first time in close to a decade earlier in 2022, crude oil prices slid in the back half of the year as interest [Read more] WASHINGTON - From the frosty throes of a Canadian winter, the land of conquistadors and Frida Kahlo can seem a million miles away. But that's not the way North American diplomats, trade experts and business leaders see it — and they hope the continent's leaders have a similar vision as the so-called "Three Amigos" gather this week in Mexico City. "The potential for North America is immense," said Eric Farnsworth, the former Clinton-era White House official who now leads the D.C. office of [Read more]