The SAGD well pair was drilled to a vertical depth of approximately 650 meters with a horizontal length of 780 meters each. Steam injection began in May 2014 and circulated for up to four months with production commencing in mid-September 2014. The start of our bitumen sales averaged 221 barrels per day, half way through the 3rd thirty day period since the start-up of production. The production has since increased significantly. For the month of March 2015, bitumen sales averaged 319 barrels per day, with a Steam Oil Ratio (“SOR”) of 5.4. In the last 16 days of March, the production averaged 350 barrels per day with an SOR of 4.9. A single daily production peak was achieved in March 2015 at 421 barrels per day. All of these production numbers are on a 100% basis with Deep Well owning a 25% working interest through its subsidiaries. Deep Well also beneficially owns 2.24% of Andora Energy Corporation. Over the next several months, bitumen production from the SAGD well pair is expected to increase as the steam chamber continues to develop. The steam chamber is now expected to reach the top of the Bluesky sandstone reservoir in April of 2015. Based on the operator’s forecasts, the maximum production rates and a stable SOR are expected around September 2015. Below is a graph of the Average Daily Production Rate, by month, from this first SAGD well. 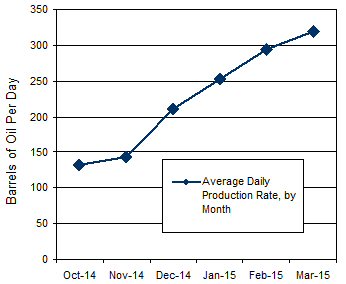 This press release contains forward-looking statements. The words or phrases “might”,” “purported”, “claimed”, “would be,” “to be,” “will allow,” “intends to,” “will likely result,” ” expected,” “will continue,” “is anticipated,” “potential,” “recoverable,” “estimate,” “forecast,” “project,” “plans,” or similar expressions are intended to identify “forward-looking statements.” Actual results could differ materially from those projected in the Corporation’s proposed oil and gas related business and described in this press release. The Corporation’s business and the realization of the results contemplated by this press release are subject to various risks, which are discussed in the Corporation’s filings with the SEC. The Corporation’s filings may be accessed at the SEC’s EDGAR system at www.sec.gov. Statements made herein are as of the date of this press release and should not be relied upon as of any subsequent date. The Corporation cautions readers not to place reliance on such statements. Unless otherwise required by applicable law, we do not undertake, and we specifically disclaim any obligation, to update any forward- looking statements to reflect occurrences, developments, unanticipated events or circumstances after the date of such a statement.