CALGARY, Sept. 26, 2017 /CNW/ – The National Energy Board (NEB), together with the Alberta Geological Survey (AGS), today released a new resource assessment for the Duvernay Shale in central Alberta that adds significant quantities of marketable light oil resources in the province as well as natural gas and natural gas liquids (NGLs). 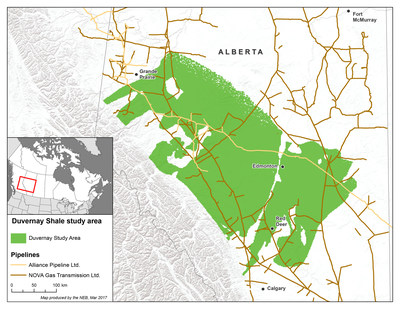 The Duvernay Shale covers nearly 20 per cent of the province, stretching from just below Grande Prairie to just north of Calgary and east of Edmonton. Companies have been drilling the Duvernay for shale gas and oil since 2011, and the region has extensive existing pipeline infrastructure.

Deposited about 370 million years ago, the Duvernay Shale is rich in organic matter and ranges from about one kilometre to more than five kilometres deep. The Duvernay generally starts getting prospective for oil and gas production below 2.5 km, with the formation generally oily in areas shallower than 3 km and gassier in areas deeper than 3 km.

A resource assessment of a formation's marketable petroleum estimates the total amount of sales-quality oil, natural gas and even NGLs that can potentially be recovered from a formation with existing technology. Resource assessments are based on a number of factors such as the geology of the reservoir and production from existing wells.

The NEB will be releasing a second report later this fall examining the economics of the Duvernay Shale resource.

Quote:
“This new assessment further solidifies our understanding of the extensive – and increasingly abundant – natural gas and oil resources in Alberta. Studies like this one also demonstrate the collaboration between the NEB and other government agencies. And they enable all governments to be better informed when building policy around resource development and energy markets.”

The National Energy Board is an independent federal regulator of several parts of Canada's energy industry. It regulates pipelines, energy development and trade in the public interest with safety as its primary concern. For more information on the NEB and its mandate, please visit www.neb-one.gc.ca

The Alberta Geological Survey (AGS) is a branch of the Alberta Energy Regulator (AER) and provides geological information and advice to the Government of Alberta, the AER, industry and the public to support responsible exploration, sustainable development, regulation, and conservation of Alberta's resources.