CALGARY, AB – Topaz Energy Corp. (TSX: TPZ) (“Topaz” or the “Company”) is pleased to announce that in furtherance of its growth strategy of acquiring low-risk, premium royalty interests to generate free cash flow(1) growth, it has entered into definitive agreements with Tourmaline Oil Corp. (“Tourmaline”) for the purchase of gross overriding royalty interests on approximately 296,000 gross acres in the NEBC Montney play area, for total cash consideration of $145.0 million (the “NEBC Montney Royalty Acquisition”), which will be funded through Topaz’s existing credit facilities. The NEBC Montney Royalty Acquisition lands were recently acquired by Tourmaline pursuant to its ongoing NEBC consolidation strategy, including the acquisition of privately owned Black Swan Energy as well as developed and undeveloped acreage from Paramount Resources in the Birch area of the North Montney trend.  Upon close of the acquisition, Topaz will own royalty interests on 100% of Tourmaline’s NEBC Montney acreage.

Pursuant to the NEBC Montney Royalty Acquisition, Topaz will acquire a newly created gross overriding royalty interest on natural gas, crude oil, and condensate production on approximately 296,000 gross acres of Tourmaline’s developed and undeveloped lands in the NEBC Montney play area, which will increase Topaz’s existing, contiguous NEBC Montney royalty acreage by 53%.  The gross overriding royalty interest to be acquired by Topaz is: i) 4% on natural gas production until December 31, 2023 and 3% thereafter; and ii) 2.5% on crude oil and condensate production.

The NEBC Royalty Acquisition is expected to close on August 3, 2021, subject to satisfaction of customary closing conditions.

The NEBC Montney Royalty Acquisition assets’ current production is approximately 50,000 boe/d(3) (19% natural gas liquids) which is expected to increase to approximately 60,000 boe/d(4) in 2022 upon completion of deep cut facility enhancements which are currently underway.  Tourmaline has identified over 1,700 gross future drilling locations on the underlying lands.

The NEBC Montney Royalty Acquisition is expected to increase Topaz’s 2022 average royalty production by over 1,800 boe/d(5), enhances Topaz’s near and long-term free cash flow profile and is accretive to Topaz’s 2022 per share metrics, including 8% on both EBITDA(1)(2) and free cash flow(1)(2) and 14% on royalty production(2).  Topaz estimates its pro forma 2021 exit net debt / EBITDA(1)(2) to be approximately 1.2x and its 2021 estimated payout ratio(1)(2) to be 58%, slightly below its 60 to 90% target range.  Upon closing of the NEBC Royalty Acquisition, Topaz will own royalty interests on approximately 770,000 gross acres in the NEBC Montney play area, from which production is expected to average approximately 175,000 boe/d during 2022 and Tourmaline is well positioned to accelerate growth over the next decade in order to provide critical supply for future LNG export.

On July 1, 2021, Topaz completed its previously announced (May 18, 2021) acquisition from Tourmaline, for the purchase of gross overriding royalty interests on approximately 535,000 gross acres (288,000 gross acres of Montney rights) in the Laprise/Conroy North Montney play area of NEBC and working interest ownership in Tourmaline’s Gundy infrastructure which is supported by a ten-year fixed take-or-pay commitment, for total cash consideration of $245.0 million. 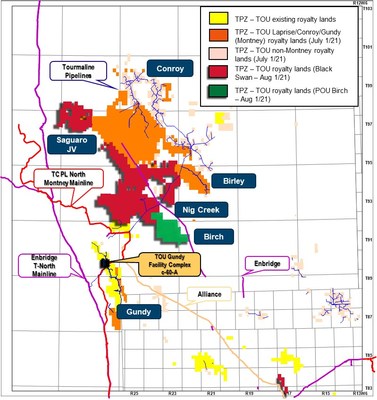 Topaz is a unique royalty and energy infrastructure company focused on generating free cash flow growth and paying reliable and sustainable dividends to its shareholders, through its strategic relationship with one of Canada’s largest natural gas producers, Tourmaline, an investment grade senior Canadian E&P company, and leveraging industry relationships to execute complementary acquisitions from other high-quality energy companies, while maintaining its commitment to environmental, social and governance best practices.

Such risks and uncertainties include, but are not limited to, the  failure  to complete acquisitions on the terms or on the timing announced  or at all and the failure to realize some or all of the anticipated benefits of acquisitions including estimated royalty production, royalty production revenue growth, and the factors discussed in the Company’s recently filed Management’s Discussion and Analysis (See “Forward-Looking Statements” therein), Annual Information Form (See “Risk Factors” and “Forward-Looking Statements” therein) and other reports on file with applicable securities regulatory authorities and may be accessed through the SEDAR website (www.sedar.com) or Topaz’s website (www.topazenergy.ca).

Statements relating to “reserves” are also deemed to be forward looking information, as they involve the implied assessment, based on certain estimates and assumptions, that the reserves described exist in the quantities predicted or estimated and that the reserves can be profitably produced in the future.

Without limitation of the foregoing, future dividend payments, if any, and the level thereof is uncertain, as the Company’s dividend policy and the funds available for the payment of dividends from time to time is dependent upon, among other things, free cash flow(6), financial requirements  for the Company’s operations and the execution of its growth strategy, fluctuations in working capital and the timing and amount of capital expenditures, debt service requirements and other factors  beyond the Company’s control. Further, the ability of Topaz to pay dividends will be subject to applicable laws (including the satisfaction of the solvency test contained in applicable corporate legislation) and contractual restrictions contained in the instruments governing its indebtedness, including its credit facility.

Topaz does not undertake any obligation to update such forward–looking information, whether as a result of new information, future events or otherwise, except as expressly required by applicable law.

In addition to using financial measures prescribed by International Financial Reporting Standards (“IFRS” or “GAAP”), references are made in this news release to “free cash flow”, which is a measure that does not have any standardized meaning as prescribed by IFRS. Management uses this term for its own performance measures and to provide shareholders and potential investors with a measurement of the Company’s efficiency and its ability to generate the cash necessary to fund dividends and a portion of its future growth expenditures or to repay debt. Accordingly, investors are cautioned that this non-GAAP financial measure may not be comparable to similarly defined measures presented by other entities and should not be considered in isolation nor as an alternative to net income (loss) from continuing operations or other financial information determined in accordance with GAAP as an indication of the Company’s performance. References to “free cash flow” are to the amount of cash estimated to be available for dividends to shareholders in accordance with the Company’s dividend policy and is defined as cash flow less capital expenditures, where “cash flow” is defined as cash from (used in) operations before changes in non-cash working capital.

This news release also makes reference to the terms “EBITDA,” “EBITDA per share,” “cash flow,” “free cash flow,” “free cash flow per share,” “payout ratio,” “adjusted working capital,” “net debt,” “net debt / EBITDA” and “which are not recognized measures under GAAP, and do not have a standardized meaning prescribed by GAAP. Accordingly, the Company’s use of these terms may not be comparable to similarly defined measures presented by other companies. Management uses the terms “EBITDA,” “free cash flow,” “adjusted working capital,” “net debt” and “net debt / EBITDA” for its own performance measures and to provide shareholders and potential investors with a measurement of the Company’s efficiency and its ability to generate the cash necessary to fund dividends and a portion of its future growth expenditures or to repay debt.  Accordingly, investors are cautioned that the non-GAAP financial measures should not be considered in isolation nor as an alternative to net income (loss) from continuing operations or other financial information determined in accordance with GAAP as an indication of the Company’s performance.

This news release contains certain oil and gas metrics which do not have standardized meanings or standard methods of calculation and therefore such measures may not be comparable to similar measures used by other companies and should not be used to make comparisons. Such metrics have been included in this document to provide readers with additional measures to evaluate the Company’s performance; however, such measures are not reliable indicators of the Company’s future performance and future performance may not compare to the Company’s performance in previous periods and therefore such metrics should not be unduly relied upon.

Certain market, independent third-party and industry data contained in this news release is based upon information from government or other independent industry publications and reports or based on estimates derived from such publications and reports. Government and industry publications and reports generally indicate that they have obtained their information from sources believed to be reliable, but the Company has not conducted its own independent verification of such information. This news release also includes certain data, including production, well count estimates, capital expenditures and other operational results, derived from public filings made by independent third parties. While the Company believes this data to be reliable, market and industry data is subject to variations and cannot be verified with complete certainty due to limits on the availability and reliability of raw data, the voluntary nature of the data gathering process and other limitations and uncertainties inherent in any statistical survey. The Company has not independently verified any of the data from independent third-party sources referred to in this news release or ascertained the underlying assumptions relied upon by such sources.

Certain information contained in this news release relating to the Company’s public issuer counterparties which include Tourmaline and the nature of its business is taken from and based solely upon information published by Tourmaline. The Company has not independently verified the accuracy or completeness of any such information.