With these second quarter results Gear has made great strides in generating value by delivering the exceptional capital discipline that shareholders have come to expect from their Company. Significant free funds from operations have again been realized through the quarter while maintaining stable production levels and aggressively reducing outstanding debt. Gear has continued to efficiently and economically deliver the energy that society requires to maintain the quality of life and high standard of living that we have all come to expect in the developed world.

The latest US Energy Information Administration inventory report dated July 28, 2021 showed that US crude oil inventory levels were a staggering 101 million barrels lower than one year prior. As a result, West Texas Intermediate (“WTI”) prices are continuing to show strength as the year progresses. Prices are currently averaging US$73 per barrel, a modest increase compared to the second quarter 2021 average of US$66 per barrel. Both numbers are a dramatic improvement over a year ago when second quarter 2020 WTI oil prices averaged only US$28 per barrel, a record low for Gear. The outlook for the remainder of 2021 continues to look strong with the second half predicted to have continual debt repayments, production growth, and material free funds from operations. Using current forward strip prices, net debt is forecasted to be approximately $12 million by the end of 2021. In addition to the balance sheet strengthening, Gear is forecasting fourth quarter 2021 production to be approximately 5,900 boe per day or an eight per cent growth from the second quarter 2021 production as a result of a robust 2021 drilling program. With material amounts of free funds from operations, Gear continues to weigh the various opportunities to increase shareholder value. The options currently include the potential declaration of dividends, increased organic growth, acquisitions, and/or share buybacks. 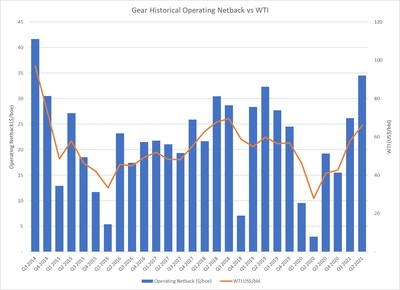 Forward-looking Information and Statements
This press release contains certain forward-looking information and statements within the meaning of applicable securities laws. The use of any of the words “expect”, “anticipate”, “continue”, “estimate”, “objective”, “ongoing”, “may”, “will”, “project”, “should”, “believe”, “plans”, “intends”, “strategy” and similar expressions are intended to identify forward-looking information or statements. In particular, but without limiting the foregoing, this press release contains forward-looking information and statements pertaining to the following: the second half of 2021 predicted to have continual debt repayments, production growth, and material free funds from operations; the forecast of net debt of $12 million by the end of 2021; fourth quarter 2021 production to be 5,900 boe per day; the expectation that the Tableland light oil well will be on production in early August; and the forecasting of continual debt reductions for the remainder of the year; the planned move to Provost to drill a four well program; and planned fourth quarter implementation of three waterfloods to assist year end production and reserves.The forward-looking information and statements contained in this press release reflect several material factors and expectations and assumptions of Gear including, without limitation: that Gear will continue to conduct its operations in a manner consistent with past operations; the general continuance of current industry conditions; the continuance of existing (and in certain circumstances, the implementation of proposed) tax, royalty and regulatory regimes; the accuracy of the estimates of Gear’s reserves and resource volumes; certain commodity price and other cost assumptions; and the continued availability of adequate debt and equity financing and funds from operations to fund its planned expenditures. Gear believes the material factors, expectations and assumptions reflected in the forward-looking information and statements are reasonable but no assurance can be given that these factors, expectations and assumptions will prove to be correct.

To the extent that any forward-looking information contained herein may be considered a financial outlook, such information has been included to provide readers with an understanding of management’s assumptions used for budgeting and developing future plans and readers are cautioned that the information may not be appropriate for other purposes. The forward-looking information and statements included in this press release are not guarantees of future performance and should not be unduly relied upon. Such information and statements involve known and unknown risks, uncertainties and other factors that may cause actual results or events to differ materially from those anticipated in such forward-looking information or statements including, without limitation: the continuing impact of the COVID-19 pandemic; changes in commodity prices; changes in the demand for or supply of Gear’s products; unanticipated operating results or production declines; changes in tax or environmental laws, royalty rates or other regulatory matters; changes in development plans of Gear or by third party operators of Gear’s properties, increased debt levels or debt service requirements; any action taken by Gear’s lenders to reduce borrowing capacity or demand repayment under its Credit Facilities; inaccurate estimation of Gear’s oil and gas reserve and resource volumes; limited, unfavorable or a lack of access to capital markets; increased costs; a lack of adequate insurance coverage; the impact of competitors; and certain other risks detailed from time to time in Gear’s public documents including in Gear’s most current annual information form which is available on SEDAR at www.sedar.com.

The forward-looking information and statements contained in this press release speak only as of the date of this press release, and Gear does not assume any obligation to publicly update or revise them to reflect new events or circumstances, except as may be required pursuant to applicable laws.

NON-GAAP Measures
This press release contains the terms funds from operations, net debt and operating netback, which do not have standardized meanings under Canadian generally accepted accounting principles (“GAAP”) and therefore may not be comparable with the calculation of similar measures by other companies. Management believes that these key performance indicators and benchmarks are key measures of financial performance for Gear and provide investors with information that is commonly used by other oil and gas companies. Funds from operations is calculated as cash flow from operating activities before changes in noncash operating working capital and decommissioning liabilities settled. Net debt is calculated as debt less current working capital items, excluding risk management contracts. Operating netbacks are presented both before and after taking into account the effects of hedging and are calculated based on the amount of revenues received on a per unit of production basis after royalties and operating costs. Additional information relating to certain of these non-GAAP measures, including the reconciliation between funds from operations and cash flow from operating activities, can be found in the MD&A.

Barrels of Oil Equivalent
Disclosure provided herein in respect of BOEs may be misleading, particularly if used in isolation. A BOE conversion ratio of six Mcf to one Bbl is based on an energy equivalency conversion method primarily applicable at the burner tip and do not represent a value equivalency at the wellhead. Additionally, given that the value ratio based on the current price of crude oil, as compared to natural gas, is significantly different from the energy equivalency of 6:1; utilizing a conversion ratio of 6:1 may be misleading as an indication of value.

Initial Production Rates
Any references in this document to initial production (or IP) rates are useful in confirming the presence of hydrocarbons, however, such rates are not determinative of the rates at which such wells will continue production and decline thereafter. Additionally, such rates may also include recovered “load oil” fluids used in well completion stimulation. Readers are cautioned not to place reliance on such rates in calculating the aggregate production for Gear.