CALGARY, AB – Kiwetinohk Energy Corp. (TSX: KEC) has entered into an agreement to acquire an additional 28.5% average working interest in Kiwetinohk-operated Montney assets in the Placid area for total cash consideration of $61.4 million (purchase price net of adjustments is approximately $59 million) (the Acquisition). The Acquisition includes 1,200 boe/d (45% oil & liquids) of current Montney production and increases Kiwetinohk’s Placid area natural gas processing and condensate handling capacity to 100 MMcf/d and 5,000 bbl/d respectively (an increase of 30 mmcf/d and 1,750 bbl/d). Kiwetinohk will obtain an incremental 14.12% ownership in the 14-28 Bigstone sweet natural gas processing facility, bringing its total working interest to 39.31%. Total owned processing capacity at the Bigstone sweet natural gas processing facility increases from 20 MMcf/d to 31 MMcf/d. The Acquisition is expected to close on or about September 15, 2022, with an effective date of July 1, 2022.

With this Acquisition, Kiwetinohk has now increased its working interest to 100% in 53,000 Montney acres in the area where all its new Montney drilling has occurred in the past two years. The Acquisition consolidates Kiwetinohk’s position in the Placid Montney area and increases its average working interest over 79,000 acres in the region to 88.2%. Grossing up Kiwetinohk’s Montney reserves for the Acquisition adds 12.9 MMboe of total proved plus probable (TPP) reserves, based on the independent reserves report of McDaniel & Associates Consultants Ltd. (McDaniel) effective as of December 31, 2021. The acquired assets are in the Company’s Montney and Duvernay core area near Fox Creek, Alberta. Following the Acquisition Kiwetinohk is now 45% weighted to the Montney on current production and 43% on TPP reserves as reported in McDaniel’s independent report at year end 2021.

The Acquisition will be funded through Kiwetinohk’s bank facilities and is accretive on all per share metrics. With ample borrowing capacity, a lending facility redetermination was not required to undertake this transaction. Kiwetinohk’s next routine lending redetermination is scheduled for the fourth quarter. On closing, Kiwetinohk is expected to have $210.0 million of available borrowing capacity, 56% of its current $375 million bank facility.

The Acquisition consolidates Kiwetinohk’s interest in the Placid area, providing control over future development planning, optimizing infrastructure and streamlining decision making as to the lands that include the acquired assets. With increased control, Kiwetinohk plans to accelerate the development of the Placid area and establish a material Montney position to complement its existing Duvernay base. Production from the Montney Placid area may also be used to satisfy Kiwetinohk’s Alliance Pipeline firm commitment obligations, reducing purchased replacement gas requirements while adding the benefit of currently favourable Chicago natural gas pricing to current production, which further increases its peer-leading corporate netbacks of $70.70/boe (pre-hedging) reported in the second quarter.

The Acquisition increases Kiwetinohk-owned processing capacity, further augmenting regional infrastructure ownership and control. This will enable Kiwetinohk to treat more sour gas through owned facilities and reduce reliance on third party sour gas processing, immediately decreasing per boe processing fees. With the added potential to optimize the facility for sour gas disposal, Kiwetinohk could further reduce processing costs over the medium term. This is a continuation of Kiwetinohk’s long-term strategy of owning its processing infrastructure and being a low-cost producer.

This Acquisition will also eliminate an Area of Mutual Interest (AMI) agreement. This means Kiwetinohk no longer has an obligation to offer participation in future Placid area acquisitions to its former working interest partner, further supporting regional control over Kiwetinohk’s Montney land position.

“We are buying a non-operated interest in quality lands that we currently operate. Our knowledge of the assets reduces the risks related to the transaction,” said CEO Pat Carlson. “The transaction gives us greater control on the planning and execution of the development of these lands which are within our Fox Creek core area. This transaction is an important milestone in our goal of growing to be a significant provider of clean energy, electricity, and hydrogen as Alberta’s energy markets transition.” 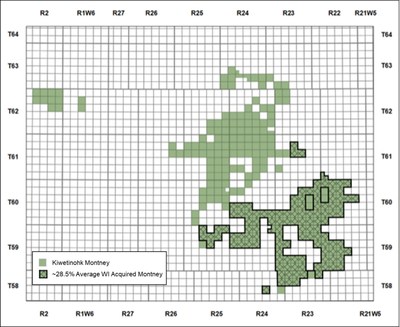 The Placid area has been historically underdeveloped, and with regional control established, Kiwetinohk plans to accelerate its Montney development program with a dedicated drilling program anticipated to start at the end of 2022/early 2023. The Company plans to drill up to 6 wells per year on this recently consolidated Placid area Montney position. The initial program will utilize a similar strategy the Company has communicated for its Simonette area, which is filling its available production facilities to achieve strong capital efficiencies on new production and reduce per unit operating costs.

Kiwetinohk’s Placid area production is currently 7,000 boe/d (45% oil and liquids) and is expected to increase to, and be maintained at, 11,500 – 13,000 boe/d (pro-forma) by 2023 exit, with the drilling of up to 6 wells per year based on existing owned facility capacity. As well, the Company has had success moderating the existing production decline in the Placid area through low-cost optimization and expects to continue arresting it with its consolidated ownership.

Net debt to annualized adjusted funds flow from operations is expected to be 0.5x on closing. The leverage ratio remains comfortably below corporate target ceiling levels of 1.0x and the Company retains ample borrowing capacity on its credit facilities to undertake ongoing operations while maintaining strong financial flexibility.

The following table sets out Kiwetinohk’s revised and previous financial and operational guidance for 2022.

National Bank Financial Inc. is acting as exclusive financial advisor to Kiwetinohk on the Acquisition.

We, at Kiwetinohk, are passionate about addressing climate change and the future of energy. Kiwetinohk’s mission is to build a profitable energy transition business providing clean, reliable, dispatchable, low-cost energy. Kiwetinohk develops and produces natural gas and related products and is in the process of developing renewable power, natural gas-fired power, carbon capture and hydrogen clean energy projects. We view climate change with a sense of urgency, and we want to make a difference.

Kiwetinohk’s common shares trade on the Toronto Stock Exchange under the symbol KEC.

Additional details are available within the year-end documents available on Kiwetinohk’s website at www.kiwetinohk.com and SEDAR at www.sedar.com.

Reserves estimates in this press release are based on the evaluation prepared by McDaniel as set out in its report effective as of December 31, 2021 (the McDaniel Reserves Report), which was prepared in accordance with National Instrument 51-101 (NI 51-101) and the Canadian Oil and Gas Evaluation Handbook. The McDaniel Reserves Report was based on the average forecast pricing of McDaniel, GLJ Ltd. and Sproule Associates Limited and inflation rates and foreign exchange rates as at January 1, 2022, which is available on McDaniel’s website at www.mcdan.com.

Notes:
1 Disclosure of reserves on a per boe basis in this press release consists of the constituent product types and their respective quantities disclosed in this table.
2 All reserves information in this press release in respect of the Acquisition are “Company share reserves”. Company share reserves are the total working interest reserves before the deduction of any royalties and including any royalty interests receivable on the assets comprising the Acquisition.

The term “boe” may be misleading, particularly if used in isolation. A boe conversion rate of six thousand cubic feet of natural gas per barrel of oil (6 mcf:1 bbl) is based on an energy equivalency conversion method primarily applicable at the burner tip and do not represent a value equivalency at the wellhead. Given that the value ratio based on the current price of crude oil as compared to natural gas is significantly different from an energy equivalency of 6:1, utilizing a conversion ratio of 6:1 may be misleading as an indication of value.

NI 51-101 includes condensate within the NGLs product type. The Company has disclosed condensate as combined with crude oil and separately from other NGLs since the price of condensate as compared to other NGLs is currently significantly higher, and the Company believes that this crude oil and condensate presentation provides a more accurate description of its operations and results therefrom. Crude oil therefore refers to light oil, medium oil, tight oil, and condensate. NGLs refers to ethane, propane, butane, and pentane combined. Natural gas refers to conventional natural gas and shale gas combined.

Certain information set forth in this news release contains forward-looking information and statements including, without limitation, management’s business strategy, management’s assessment of future plans and operations. Such forward-looking statements or information are provided for the purpose of providing information about management’s current expectations and plans relating to the future. Forward-looking statements or information typically contain statements with words such as “anticipate”, “believe”, “expect”, “plan”, “intend”, “estimate”, “project”, “potential” or similar words suggesting future outcomes or statements regarding future performance and outlook. Readers are cautioned that assumptions used in the preparation of such information may prove to be incorrect. Events or circumstances may cause actual results to differ materially from those predicted as a result of numerous known and unknown risks, uncertainties, and other factors, many of which are beyond the control of the Company.

In particular, this news release contains forward-looking statements pertaining to the following:

In addition to other factors and assumptions that may be identified in this news release, assumptions have been made regarding, among other things:

Readers are cautioned that the foregoing list is not exhaustive of all factors and assumptions that have been used. Although the Company believes that the expectations reflected in such forward-looking statements or information are reasonable, undue reliance should not be placed on forward-looking statements as the Company can give no assurance that such expectations will prove to be correct.

Readers are cautioned that the foregoing list is not exhaustive of all possible risks and uncertainties.

This news release contains the following measures that do not have a standardized meaning under generally accepted accounting principles (GAAP) and therefore may not be comparable to similar measures presented by other entities: borrowing capacity, free cash flow, adjusted funds flow from operations, net debt and net debt to adjusted funds flow from operations. These measures should not be considered in isolation or as a substitute for performance measures prepared in accordance with GAAP and should be read in conjunction with the consolidated financial statements of the Company. Readers are cautioned that these non-GAAP measures do not have any standardized meanings and should not be used to make comparisons between Kiwetinohk and other companies without also taking into account any differences in the method by which the calculations are prepared.

Please refer to the Corporation’s MD&A as at and for the six months ended June 30, 2022, under the section “Non-GAAP Measures” for a description of these measures, the reason for their use and a reconciliation to their closest GAAP measure where applicable. The Corporation’s MD&A is available on Kiwetinohk’s SEDAR profile at www.sedar.com

Financial outlook and future-oriented financial information contained in this press release about prospective financial performance, financial position or cash flows is based on assumptions about future events, including economic conditions and proposed courses of action, based on management’s assessment of the relevant information currently available. In particular, this press release contains estimates for cash flow, free cash flow, adjusted funds flow from (used in) operations, and net debt per adjusted funds flow from (used in) operations. These projections contain forward-looking statements and are based on a number of material assumptions and factors set out above and are provided to give the reader a better understanding of the potential future performance of the Company in certain areas. Actual results may differ significantly from the projections presented herein. These projections may also be considered to contain future oriented financial information or a financial outlook. The actual results of the Company’s operations for any period will likely vary from the amounts set forth in these projections, and such variations may be material. See “Risk Factors” in the Company’s AIF published on the Company’s profile on SEDAR at www.sedar.com for a further discussion of the risks that could cause actual results to vary. The future oriented financial information and financial outlooks contained in this press release have been approved by management as of the date of this press release. Readers are cautioned that any such financial outlook and future-oriented financial information contained herein should not be used for purposes other than those for which it is disclosed herein.